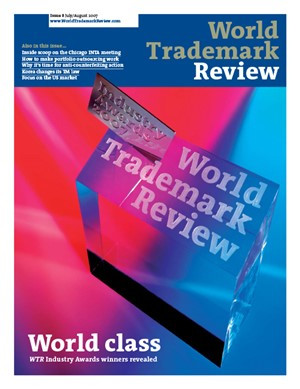 A number of key amendments to Korean trademark law came into force on July 1 2007. They broaden the scope of protection for trademarks and bring into effect a number of important practice changes

As numbers of applications for trademarks at the US Patent and Trademark Office continue to grow, the Trademark Operation is faced with numerous problems, such as delays and inconsistencies. But embracing new technology and working methods is helping it meet the rising demand

WTR spoke to a number of leading practitioners in the United States to find out who they rated as being among the best in the trademark law business. Here are the names that were mentioned most

A number of key amendments to Korean trademark law came into force on July 1 2007. They broaden the scope of protection for trademarks and bring into effect a number of important practice changes

The fight against counterfeiting and piracy has found a place on the political agenda. However, even an event as promising as the Global Congress to Combat Counterfeiting and Piracy can leave IP professionals with the feeling that a lot is being said, but not enough is being done
Lisa Lovell

On May 1 2007 World Trademark Review announced the winners of its inaugural Industry Awards, sponsored by Thomson CompuMark, for in-house trademark teams at a ceremony in Chicago. The awards are designed to recognize the vitally important work done by in-house trademark counsel, and identify the teams and individuals that are performing their functions to the highest possible standards. The following pages feature profiles of the winners

The International Trademark Association's annual meeting remains the must-attend event for the trademark industry. WTR asked afew delegates what they got out of this year's meeting.

Tony Wilson is a Vancouver franchising and trademark lawyer who has written for the Toronto Globe and Mail Macleans Magazine and other publications. His regular humour column in Bartalk Magazine was a finalist for "Best Regular Column" by the Western Magazine Awards Foundation - something which he hopes might get the damn thing syndicated one day

As part of a dispute between a Belgian brewer and champagne makers over the use of references to the appellation of origin 'champagne' in advertising, the European Court of Justice has clarified the scope of the term 'comparative advertising' and defined certain key terms in this field
Nicolas Clarembeaux

Outsourcing: why would you do that?

The counsel now responsible for the management of the Unilever trademark portfolio shares his views on the trends, motivations, business rationale and practicalities of outsourcing
Paul Rawlinson

General practice law firms are increasingly seeking to muscle out the IP boutiques, while clients become ever more demanding. Yes, the trademark services market in the United States is as tough as ever

The considerations involved in challenging an infringer are varied and the emphasis is constantly changing. These variables encourage legal counsel to keep abreast of legal and commercial developments, and often media interest as well

Brands from the FrontlineDomain name portfolio management - one company's perspective

Domain names are often managed by the in-house IP team along with trademarks, but their nature means that the best management solution for them may well be outside the trademark group
Tina M Pompey

The practice of 'domain tasting' (ie, registering large numbers of domain names for a very short period of time and keeping those that generate revenue only), though innocuous on a small scale, has grown into a problem as single companies register more than 10,000 domain names a day, oten preying on popular brands
James L Bikoff

The impact of recent Australian case law on colour marks

Non-traditional trademarks have been registrable in A ustralia since the Trademarks Act 1995 came into force. However, recent decisions of Australian courts indicate that many issues relating to the definition, scope and enforceability of these highly coveted marks remain unclear
Ross G McLean

Although Mexican law appears not to recognize non-traditional marks, on closer examination certain types of non-traditional mark enjoy full trademark protection in Mexico, provided that they fulfil specific criteria. Where the trademark law does not cover such marks, it may be possible to find alternative protection under other legal measures
Carlos Trujillo

The Benelux countries, Belgium, the Netherlands and Luxembourg, have uniform trademark and design laws, and a harmonized approach to the protection of non-traditional marks. As members of the European Union, the practice of the Benelux countries in this area is also highly influenced by EU law
Paul Steinhauser and Rens Schrijver

The tradition of non-traditional trademarks in Germany

Even before the implementation of the EU First Trad emarks Directive in Germany in 1995, the German courts and the Patent and Trademark Office had begun to establish a tradition of registering and defending non-traditional marks. However, the use of such marks has challenged German trademark practice and raised new questions to be answered by the courts
Nils Weber and Martin Viefhues

The sound of unconventional marks in the United States

There are very few limitations, in principle, to what can be registered and protected as a trademark under US law. However, tests showing that the sign is a source identifier, is not functional and is distinctive must be met
Thomas M Williams and John Gabrielides

Marilena Garis, Jacobacci & Partners, Italy
As in all EU jurisdictions, trademark law in Italy recognizes the registrability of shape, colours and sound marks in principle, but case law so far indicates a guarded approach to the registration of non-conventional marks by the national IP office and the courts
Guido Jacobacci

The view from down under

Australia is a wealthy, brand-focused country. For the well-prepared trademark owner, this is very good news