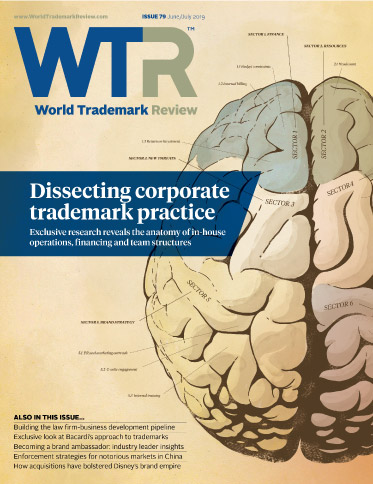 The WTR Industry Awards 2019 – which will be presented at an exclusive ceremony at Boston’s Institute of Contemporary Art – honour leading trademark teams and individuals across a range of sectors. Here we unveil the shortlist.

How to manage a Fortune 30 trademark portfolio with a lean team: Phillips 66 exclusive

Managing the trademark portfolio of a Fortune 30 company with a lean in-house team poses a distinctive set of challenges, as Craig Stone, senior IP counsel at oil and gas giant Phillips 66 Company, explains to WTR.

While legal know-how is critical for law firm practitioners, an understanding of the corporate business environment should not be underestimated. That is the message conveyed by Anna Panka, senior counsel at Bacardi, in an exclusive interview with WTR.

Becoming a brand ambassador: what does it actually mean?

There has been much talk in recent years about the evolving role of trademark counsel as practitioners are increasingly required to embrace a wider remit. We explore the driving forces behind this transition, the steps that in-house counsel can take to facilitate the change and what it means for corporate trademark departments.

The business development mindset – how to approach marketing

There are a host of opportunities that can be leveraged to raise the profile of your trademark practice and its partners. So which business development activities should you use to make money?

An incredibly prolific trademark filer in Japan, Ikuhiro Ueda, is causing headaches for brands, according to experts. In an exclusive investigation from WTR, we reveal the staggering scope of this portfolio-building exercise.

In this week's data focus, we look at how multi-media giant Disney is stockpiling recognisable brands to build out its business operations and adapt to a changing industry.

Online gaming has driven significant growth in the gambling industry and key players are capitalising on intellectual property to protect their innovations.

A recent judgment in a dispute between Facebook and Tommy Hilfiger could have a significant impact on the fight against fakes.

Many companies have learned the hard way that unidentified IP issues can cause serious trouble, whether immediately or even years after closing a transaction. A strategic approach to IP portfolio due diligence is thus critical to avoid future problems.

A somewhat surprising – and widely criticised – decision from the Court of Justice of the European Union on the debranding and rebranding of goods in transit has provided trademark owners with a valuable tool for enforcing their IP rights.

OAPI: change is on the way

The African Intellectual Property Organisation’s recent changes to the Bangui Agreement are due to have a significant effect on trademark rights. Although the revised agreement is not yet in force, IP practitioners should start familiarising themselves with the new system

Seven strategies for dealing with enforcement at notorious markets in China

Brand victories in the fight against physical market sellers and landlords are all too rare. However, there are a number of practical strategies that can be employed to maximise success in the battle against counterfeits.

The new Trademark Law marks a significant step in the government’s efforts to increase Myanmar’s attractiveness as a destination for foreign investment. For rights holders, it also means that now is the time to prepare for the new regime.

Your partner in the field: maximising results from US Customs and Border Protection

From recordal to training, there are a number of steps that rights holders can take to enlist the help of US Customs and Border Protection in their anti-counterfeiting endeavours.

How an emergency decree transformed the trademark landscape in Argentina

One year after a significant shift in the Argentine trademark landscape, it is time to reflect on how practitioners have adapted and what international rights holders need to know now.

The country is seeing increased interest from international entities - particularly from the US; this will likely grow in scale as not only the South African economy develops, but as other emerging markets on the African continent grow.

Passing the baton: a new era at BOIP

As a new director general of the Benelux Office for Intellectual Property takes over, a new era at the registry begins. To mark this change, representatives from the office look at what the future is likely to bring.

Why to diversify your Caribbean portfolio

While many of the Caribbean islands seem to be low-priority venues for trademark filings, there are some significant reasons why they should not be overlooked.

Career development advice from the inside

In the first of a new series focused on career development, we present the corporate counsel view on effective networking and why it matters.

Registration: tips on securing your mark in China

One of the most common issues faced when securing protection in China is the earlier registration of third-party rights, which are then cited against the later application. However, there are various tactics that can be adopted to overcome this hurdle.

Five things you need to know – Latin America and the Caribbean

Protection for non-traditional trademarks lags behind in China

Although China recognises non-traditional marks, it is still rare for them to secure protection. Nevertheless, the situation and the market are improving and applicants will one day be able to effectively protect their rights in all types of trademark in China.

Focusing on trade dress in the European Union

As the use of distinctive and non-traditional signs continues to evolve, EU legislation now allows for objects, actions and patterns, among others, to be registered as trademarks, with a key focus on trade dress.

Protecting the knowledge and traditional cultural expressions of different cultures and indigenous communities is a complex task. Opinions are divided, but one route may involve IP rights to protect traditional forms of innovation and creativity.

Colour trademarks are growing in popularity in Russia. However, to ensure their registration, the colour in question must be capable of sufficiently distinguishing the product or service and its origin.

Can you trademark sounds, smells, colours, motions and flavours?

Trademarks are much more than a logo used to identify a brand. Non-traditional trademarks using sounds, colours and shapes have exploded onto the scene, bringing notoriety to many a business and brand.