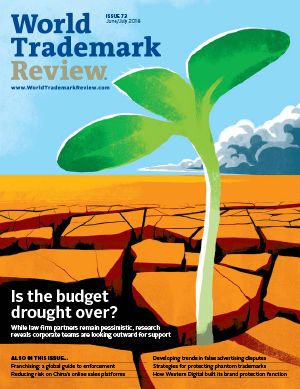 Is the budget drought over?

More than a quarter of corporate trademark teams are predicting budget increases in the next 12 months. However, despite rising levels of work being outsourced to law firm partners, pessimism over the future is growing among private practice professionals.

For over 18 months, World Trademark Review has been covering the rampant trademark activity of multi-millionaire entrepreneur Michael Gleissner. We take a look at the story so far and why it matters to rights holders.
Tim Lince

A data-led exploration into the Chinese trademark market reveals that filing numbers at the Chinese registry have broken records yet again, while domestic applicants have overtaken their US counterparts in EU and UK filings for the first time.
Timothy Au

Shifting markets and brand positions in a transforming industry

Putting the automotive industry under the magnifying lens reveals that a shift in focus from West to East is beginning. Meanwhile, the proliferation of driverless technology is leading to a rise in trademark filings.
Timothy Au

The WTR Industry Awards 2018 – which will be presented at an exclusive ceremony at the Seattle Arts Museum – honour leading trademark teams and individuals across a range of sectors. We reveal the shortlist.

In the first of a series of interviews with leading corporate trademark counsel, World Trademark Review spoke to Cynthia Tregillis of Western Digital Corporation on collaboration in anti-counterfeiting efforts and the challenges of setting up a new brand protection group.
Adam Houldsworth

“The Stan Lee name is the most important asset”: exclusive interview with POW! Entertainment’s Relani Belous

Continuing our series of interviews with some of the world’s leading corporate trademark professionals, World Trademark Review spoke to Relani Belous, who outlines the brand challenges she faces in her role as general counsel of Stan Lee’s POW! Entertainment.
Adam Houldsworth

Developing a ‘.brand’ strategy: practical lessons from round one

The strategies used so far by owners of  ‘.brand’ top-level domains in the first round - from full migrations to microsites - demonstrate just how widely it can be used.
Ken Taylor

As debates over authenticity and privacy heat up and it becomes ever-more challenging to navigate the ethics, a new role for ‘.brand’ top-level domains is emerging.
Ken Taylor

Franchising in Indonesia: an enforcement overview

In the latest part of our series focusing on the legislative frameworks that govern franchising in Asia and South America, we discuss enforcement in Indonesia.
Carlos Dávila-Peniche

Thailand: franchising agreements and how to enforce them

As part of our deep dive into franchising in Asia and South America, we turn our attention to enforcement and termination rules in Thailand.
Carlos Dávila-Peniche

Franchising: the legislative framework in Singapore and Malaysia

The rules governing franchise agreements vary greatly across Asia. Here, we look at the different legislation related to enforcement and termination in Singapore and Malaysia.
Carlos Dávila-Peniche

Franchising and contract enforcement in Peru

In our series focusing on franchising across Asia and South America, we take a closer at the Peruvian legislation that governs contract enforcement and termination.
Carlos Dávila-Peniche

As part of our Asia and South America series, we provide an overview of the rules that govern the enforcement and termination of franchise agreements in Argentina.
Carlos Dávila-Peniche

As part of our deep dive into franchising rules in Asia and South America, we outline the rules that govern enforcement and termination of franchise agreements in Mexico.
Carlos Dávila-Peniche

Enforcement and termination of franchise agreements in the Philippines

We take a close look at the Philippines legislation governing the enforcement and termination of franchise agreements, as part of our series on franchising in Asia and South America.
Carlos Dávila-Peniche

Franchising in Chile: a guide to enforcement and termination

This series outlines the legislative framework for franchising in nine jurisdictions across Asia and South America. In this instalment, we focus on the enforcement and termination of agreements in Chile.
Carlos Dávila-Peniche

The future of 3D trademarks: key trends and success stories

Three-dimensional trademarks have made headlines in recent years following high-profile successes and failures in relation to the registration of well-known brands. Looking at how these marks have developed over the past few years may help to determine what to expect in the future.
Gareth Jenkins and Don Pennant

Although phantom trademarks have clear advantages for their registrants, the US Patent and Trademark Office has been somewhat unpredictable in its response to applications for such marks over the years. Various strategies may help to enhance the likelihood of successful registration and use.
Paul C Llewellyn and Palak Mayani Parikh

For those seeking to tackle counterfeits on Chinese e-commerce platforms, insight into both historical approaches to illicit trade and the tools currently available is essential if success is to be achieved in this ongoing battle.
Scott J Palmer

Domainers, brand owners and the UDRP: can the gap be bridged?

While the Uniform Domain Name Dispute Resolution Policy has been a great tool for addressing the issue of domain squatting, a healthy and even-handed debate over key principles is necessary to bridge the gap between the domain and brand owner communities.

This two-part series identifies the ways in which diverse online sales platforms (OSPs) may affect brands in China, as well as some of the basic commercial and legal issues that brand owners should bear in mind when creating an OSP branding strategy.
George Chan , Sophie Zhao and Luna Lu

Maintaining control of your brand on China’s online sales platforms

Although branding on online sales platforms remains a relatively new concept, its significance should not be overlooked. In the second part of this series, we consider how brand owners maintain can control in this evolving landscape.
George Chan , Sophie Zhao and Luna Lu

A group of senior trademark and brand professionals convened in New York in January to discuss recent and developing trends in false advertising law. This special report details some of the key points and presents essential takeaways.
Doug Rettew , Anna Naydonov and Morgan Smith

A government-issued emergency decree is set to shake up trademark practice in Argentina. Key to its success will be how the Argentine Patent and Trademark Office manages the transition, so we analyse what practitioners should be mindful of going forward.
Iris V Quadrio

India
RNA, Technology and IP Attorneys
Advancements in technology and expanding marketplaces have been key to successful licensing programmes in India over recent years. Local trademark owners and licensees should now follow in the footsteps of international brands and adopt licensing as a core revenue stream.
Ranjan Narula and Swati Dalal

Mexico
Uhthoff, Gómez Vega & Uhthoff
Mexican law follows international standards with regard to trademark licensing, and licensors can benefit from a licensee’s use of their mark even where the agreement has not been recorded. However, the local rules governing ownership in these circumstances are less clear.
Mauricio Mondragón Velázquez

Italy
Bugnion SpA
Trademark licensing is recognised under Italian law despite the absence of specific legislation governing agreements. When it comes to enforcement, licensees can provide evidence of a non-written agreement through various means.
Nicoletta Colombo and Simone Verducci Galletti

United States of America
Birch Stewart Kolasch & Birch LLP
Under common law, ownership is conferred through first use of a trademark – including use by a licensee. Recent case law can help to determine which party has the right to enforce the licensed mark where an infringement suit arises.
Michael T Smith

China
Kangxin Partners
Before signing a trademark licence agreement, rights holders should ensure that they have a strong risk-prevention strategy in place, in order to benefit as either a licensor or a licensee.
Cynthia Wang and Yanyan Tong

Turkish licensees’ obligation to use

Turkey
ATG Law Firm
Rights holders can significantly benefit from a proficient licensing agreement, provided that both parties uphold their end of the bargain. Depending on the type of agreement, licensees must fulfil various obligations before they can reap the rewards of a well-established trademark.
Ece Övgü Oral and Ekin Güven

Russian Federation
Gorodissky & Partners
Foreign brand owners are free to enter into direct or indirect trademark licensing agreements in Russia. However, in order to be valid and enforceable, these agreements must contain key terms and be recorded with the Federal Service for Intellectual Property.
Sergey Medvedev

Canada
Bereskin & Parr LLP
The upcoming amendments to the Trademarks Act may bring short-term uncertainty over ownership and licensing issues. One thing that is unlikely to change is the established principle of proving a licensor’s control over a mark.
Mina Chana and Liz Afolabi

Despite being key litigation battlegrounds, counsel confidence in the court systems of China and the United States remains shaky.
Trevor Little

Trademark counsel have had their say on the efficiency of customs authorities across the globe – with some of the largest importers of counterfeit goods giving cause for continued concern.
Trevor Little

This year’s Global Trademark Benchmarking Survey reveals that despite increasing levels of trademark work, pessimism is growing about the future of private practice, with budget-conscious clients demanding more from attorneys.
Tim Lince

This year’s Global Trademark Benchmarking Survey reveals that in-house trademark counsel are increasingly looking for outside support thanks to a rise in flexible pricing and higher standards of work.
Tim Lince

The performance levels of the Chinese, Brazilian and Indian trademark offices have clear room for improvement but change could be afoot.
Trevor Little

Trademark protection in the new gTLD environment: a policy and enforcement deep dive