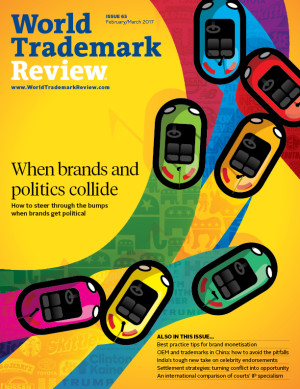 When brands and politics collide

In a year dominated by divisive political events, brands often featured in fast-moving campaigns and election cycles – whether intentionally or otherwise. Careful risk management and a clear communications strategy are crucial to survive the political circus unscathed

Significant developments at the USPTO in 2016

It has been another busy year for the trademarks organisation at the US Patent and Trademark Office. Major changes include a proposed new fee structure and a renewed focus on enhancing the customer experience
Mary Boney Denison

Cannabis marks in jeopardy – is your industry next?

Nearly 600 applications for ‘cannabis’ marks languish before the US Patent and Trademark Office, yet its patent arm happily grants protection for inventions which use the drug. Where does this disconnect come from and could other industries be vulnerable?
Gregory Wesner, Fran Jagla and Adriane Scola

Different yet the same? Intermediary liability in physical and online markets

The issue of intermediary liability is a hot topic, particularly in the online environment, with decisions in Tommy Hilfiger and Tobias Mc Fadden only intensifying the debate
Paul Maeyaert

Developing an approach to #trademarks

While France accounts for 87% of hashtag removal requests worldwide, the interplay between brands and hashtags is increasingly international – making it crucial to understand how they are treated in the European Union and the United States

Looking down the road to settle trademark disputes

Trademark disputes are largely unavoidable, but careful strategising around settlement approaches can turn conflicts into opportunities to add value to the brand involved in the dispute
James McCarthy

Celebrity endorsements are big business in India, where a nod from a Bollywood star or pro cricketer can be enough to convince consumers to part with hard-earned cash. But new legislation could be set to change this
Jack Ellis

OEM and trademark use in China: how to reap the benefits while avoiding the pitfalls

Following amendments to the trademark regime in 2014, brand owners have a number of options they can take to protect themselves if they discover bad-faith registrations of their marks
Elliot Papageorgiou

Section 58A of Australia’s Trademarks Act 1995 provides a basis for opponents to challenge the registration of trademarks accepted under prior continuous use. However, recent decisions indicate a shift away from a literal interpretation of this
Lena Balakrishnan and Kimberley Evans

When brands and politics collide

In a year dominated by divisive political events, brands often featured in fast-moving campaigns and election cycles – whether intentionally or otherwise. Careful risk management and a clear communications strategy are crucial to survive the political circus unscathed
Tim Lince

Three-dimensional printing is having serious IP implications across all industries, making it vital to strengthen the underlying legal landscape. However, a segmented – rather than blanket – approach to rights may be the best solution
Fatima Qasim

On October 20 2016 World Trademark Review hosted its second annual Managing the Trademark Asset Lifecycle event in the heart of Wall Street, New York City. The event was often boisterous, with speakers and attendees alike frequently at odds on the most effective ways to capitalise on trademark assets
Tim Lince

Talking point: 2016 industry developments and a look at the year ahead

Landlord liability actions for trademark infringement in China: a ‘how to’ guide

Experience shows that the mere pursuit of direct infringers in malls and markets is an inefficient way to discourage the sale of counterfeit goods. By contrast, strategic actions against landlords can get real results

The shift to specialism: an international comparison

With more courts establishing specialisms in IP matters across the globe, an overview of the different regimes is more important than ever

Study suggests brand owners are losing the battle against typosquatters

IANA: Transition of the IANA function – what does it mean going forward?

A significant change in the governance of the Internet took place in October 2016, when the US government ceded control over a core piece of internet infrastructure to ICANN. But what does this mean in practical terms?
Nick Wood

Disparaging marks: The question of offensiveness

The US Supreme Court’s decision to take up a constitutional challenge to the bar on registering marks that “may disparage” will have far-reaching implications for trademark practitioners, as well as the practice of trademark law
Brian Focarino

Plain packaging: Time for a change in brand protection lobbying?

European Union
Locke Lord
While the EU customs regime is a cost-efficient tool for combating counterfeiting, its scope is threatened by changes in how counterfeiters operate and the fallout from Brexit
Paolo Andreottola

Germany
Meissner Bolte
While three-dimensional printing is being hailed as a game changer, rights holders must consider how to adapt their IP strategies to meet the challenges of this new technology
Christian Hess

Russian Federation
Gorodissky & Partners
Thanks to a constant flow of counterfeits on the Russian market, Customs has evolved into a well-regulated government machine, which is orchestrating a promising number of seizures
Vladimir Biriulin

India
RNA Intellectual Property Attorneys
While India has a strong legal framework for combating counterfeiting and piracy, the challenge comes from applying these laws, along with the somewhat cumbersome procedures they set out
Ranjan Narula and Abhishek Nangia

China: Is a good anti-counterfeiting strategy possible in China?

China
Kangxin Partners PC
A variety of anti-counterfeiting options are available in China. However, the most crucial advice remains: plan ahead
Brandy E Baker

@WTRmagazine RT @BrandsAndStuff: Only one person can really stop the Sussex Royal #trademark proceeding and that is the Queen. Comment in @WTRmagazine.… Read more

@WTRmagazine RT @gowlingwlg_ru: Read about five #counterfeit hotspots in #Belarus that brand owners must be aware of in an article prepared by our profe… Read more

@WTRmagazine RT @WisesPC: How will we protect trademarks that are out of this world? Read about how outer space IP might be protected: https://t.co/s2on… Read more