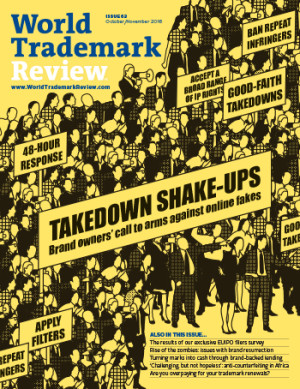 Frustration over the sale of counterfeits on digital marketplaces has reached a peak in recent months. We asked some of the world’s biggest brand owners what gold-standard protection mechanisms might improve the situation and examined how realistic their suggestions are

From OHIM to EUIPO: the journey so far

The first raft of changes to the EU trademark system are now in effect, having been implemented in March in exemplary fashion. The EU Intellectual Property Office’s next challenge is to repeat the trick for the remaining changes

Asia-Pacific is leading the world when it comes to IP collateralisation. Singapore’s groundbreaking IP Financing Scheme recently saw the approval of its first patent-backed loan – and hopefully, lending against trademarks is not far behind

Holding companies: a brief primer from Alphabet to Z

Multiple issues are affected by the decision of where to hold a business’s IP assets. As such, analysis of the legal, tax and business considerations is merely the starting point
Margaret Wheeler-Frothingham and Michelle Mancino Marsh

Are you overpaying for trademark renewals?

Against a backdrop of inflated official and law firm fees, rights holders need to engage in benchmarking exercises to ensure they are not overpaying for renewals
Volker Spitz

Fee levels: why brand owners need to react fast in the Middle East and North Africa

There have been a number of instances of defunct brands being reintroduced into the marketplace in recent months. However, current case law on the topic of residual goodwill is inconsistent at best and – whether original owner or resurrector – there is much to consider
Aisha Haley and Monica Riva Talley

Challenging but not hopeless: anti-counterfeiting in Africa

Counterfeiting is a serious problem in Africa. While laws are in place to tackle illicit trade, practical enforcement is often complicated by local capacity and attitudes

Frustration over the sale of counterfeits on digital marketplaces has reached a peak in recent months. We asked some of the world’s biggest brand owners what gold-standard protection mechanisms might improve the situation and examined how realistic their suggestions are
Tim Lince

The past year has been a busy one in Alicante. In addition to expanding its tools and activities, the EU Intellectual Property Office had to prepare for the changes ushered in by the European trademark reform package. In this year’s annual survey, we asked users to assess its performance during this period of change
Trevor Little

Is unofficial advertising around sports events playing by the rules?

Weighing up your options

Mixed blessings for New Balance in China and United States

Using the courts to tackle excessive delays at the Brazilian PTO

The Brazilian courts have handed down a number of positive decisions for rights holders, mitigating the impact of lengthy delays at the Brazilian Patent and Trademark Office
Ana Paula Affonso Brito

Not just a voice: endorsements and accountability in India

To date, no liability has been attributed to brand ambassadors where the brands they endorse have failed to live up to expectations. However, that could be set to change

Where next for EU trademarks?

The impact of Brexit on trademarks is still unclear. Might brand owners be better served by a European system which maintains the principal features of the current system, but applies them to smaller groupings of territories?

European Union
A robust legislative framework governs this controversial yet popular form of marketing in Europe, and a wealth of case law can be drawn on to determine whether comparative advertising is lawful
Paolo Cerroni and Charlie Clarence-Smith

Turkey
Kenaroglu Law Firm
The first Turkish regulation allowing comparative advertising is due to come into force by the end of 2016. But what will it mean for rights holders?
Soner Kenaroglu and Yasemin Kenaroğlu

Canada
Bereskin & Parr LLP
Several recent cases suggest that the most likely group to take action against misleading advertising may no longer be regulators or competitors, but disgruntled consumers acting as a class
Jennifer McKenzie and Catherine Lovrics

United States of America
Lewis Roca Rothgerber Christie LLP
Provided that you take care, it is quite possible to stay on the side of nominative fair use of a third-party mark, without straying into likelihood of confusion territory
Thomas J Daly and Nathaniel Edwards

India
RNA Intellectual Property Attorneys
Comparative advertising is allowed as long as the advertiser seeks to portray the advantages of its product in a truthful and honest manner. However, the courts have mixed views of puffery
Mayur Varshney and Ranjan Narula

Mexico: Staying the right side of fair

Mexico
Uhthoff, Gómez Vega & Uhthoff
Most comparative and unfair advertising campaigns are designed to denigrate the quality or reputation of a competitor’s goods or services. Fortunately, remedies are available
Carolina Ponce