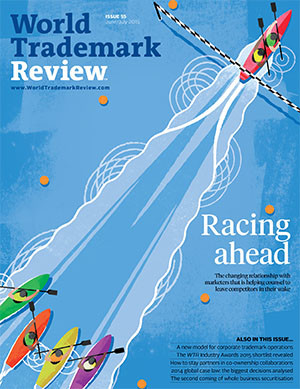 Due diligence for acquiring trademark portfolios

A record number of high-profile trademark acquisitions are being reported in India. Wherever the acquisition is located, interested parties should conduct full due diligence to avoid wasting these valuable assets

A new model for trademark operations

Trademark departments are needing to transform themselves driven by complexity, global risk, cost pressures and human capital requirements. A new model allows for significant cost savings, while being flexible enough to meet each client’s needs

US Supreme Court renews interest in the Lanham Act

In 2014 two Supreme Court opinions decided who can bring a claim for false advertising. However, it was also an important year for the First Amendment in trademark cases

The ECJ takes a multi-dimensional view of trademarks

2014 could be termed ‘the year of the three-dimensional mark’ in Europe, with the European Court of Justice issuing a high proportion of decisions related to such marks

Whether tackling issues surrounding AdWords or shape marks, recent decisions serve as a reminder that Africa should not be overlooked as a source of articulate and progressive reasoning on legal trademark development

Protection for well-known marks in Myanmar

Hopes are high that the long-awaited Trademark Act may finally come into force in Myanmar this year. Until then, foreign rights holders looking to do business there have various options for protecting their marks

Demystifying the concepts of trademark exclusivity and validity

Trademark pre-emption in China has been a concern for many, but developments in 2014 suggest that rights holders have good reason to be optimistic

A year of firsts in Singapore

Lessons from the Australian courts

A new round in the conflict between private and public rights

WTR 1000 – turning from the silver to gold tier

The WTR 1000, released in January 2015, comprehensively identifies the world’s leading trademark firms and practitioners. Here we profile those firms which have risen from the silver to gold tier

Ruling beyond legality: a new approach to interpreting the IP law?

An analysis of recent cases reveals that new grounds, which go beyond a strict civil law perspective, have been introduced into the court’s decision-making process

Keep your friends close – how to stay partners in co-ownership

While co-owned patents are not uncommon, it is unusual to find trademarks being jointly registered by more than one user. Are businesses missing a trick and how can co-owners ensure that they remain on good terms?

The second coming of US whole business securitisation

Whole business securitisation is growing in popularity and offers an innovative way for strong brands to segregate valuable intellectual property and other intangible assets from the parent company’s operating risks, and thus effectuate cheaper debt financing

The WTR Industry Awards 2015 – to be presented at an exclusive ceremony at the San Diego Natural History Museum, timed to coincide with the 137th International Trademark Association annual meeting – honour leading trademark teams and individuals across a range of sectors. We reveal the shortlist

Top IP pitfalls and how to avoid them

While Ukrainian IP law may appear familiar, foreign companies should check the finer details in order to avoid the most common mistakes that rights holders make when entering the Ukrainian market

Protecting your celebrity when image rights are insufficient

Taylor Swift, Katy Perry and Rihanna are leading the charge in finding innovative ways to use intellectual property, and trademark rights in particular, to compensate for the lack of an image right within the United Kingdom and Europe

Mexico: A portrait of protection

Romania
Dragos M Vilau
VILAU | ASSOCIATES The sale of counterfeit goods is an important issue for brand owners, but the challenge is keeping pace with levels of infringement
Dragos M Vilau

Italy: Opportunity and risk in the online environment