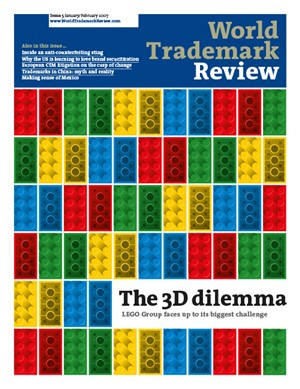 On August 25 2006 a US district court sentenced two Chinese nationals to 97 months and 87 months respectively in federal prison – a rare instance in which individuals convicted of trademark counterfeiting have been sentenced to significant jail time. Counsel for the plaintiffs tells the story of how an ambitious and complex operation had a successful outcome for the brand owners

Mexico has a developing market for legal services in relation to trademarks, which has doubled over the past 10 years. Filings from foreign mark owners have been the mainstay of business for many of the big players, but the likely ratification of the Madrid Protocol and other changes may see a change of emphasis

The changing face of CTM litigation

An ECJ decision issued in July 2006 has brought an end to forum shopping in cross-border patent litigation in Europe. There could be major consequences for CTM owners too
Kathrin Samwer and Matthias Koch

Although IP laws were among the first statutes to be adopted after the disintegration of the Soviet Union, they did not work overnight. The local economy needed to grow first and people needed to get used to a new reality. But the perception remains that the current situation still reflects the early days of the new regime, even though significant progress has been made in the field of IP protection
Vladimir I Biriulin

Securitization moves up the agenda

The LEGO Group has become the leading producer of construction toys worldwide thanks to its famous rectangular plastic brick. But protecting the shape of the toy is proving tricky

On August 25 2006 a US district court sentenced two Chinese nationals to 97 months and 87 months respectively in federal prison – a rare instance in which individuals convicted of trademark counterfeiting have been sentenced to significant jail time. Counsel for the plaintiffs tells the story of how an ambitious and complex operation had a successful outcome for the brand owners
Michael Holihan

The landscape of trademark practice in Brazil is changing rapidly, with the national IP office constantly adopting measures to try and improve trademark prosecution – often with mixed results – and various state and federal bodies moving up a few gears in the fight against counterfeiting
Rodrigo Borges Carneiro

Keeping up with the neighbours

Mexico is a big country so it is little surprise that it has a national IP office to match. With four regional offices and an unusually broad remit, the Mexican Institute of Industrial Property is leading the way in protecting and promoting the country’s trademarks

As IP crime moves up the political agenda, no one seems to be willing to discuss the real reason why activities such as counterfeiting are so attractive

Trademark managementPlaying with the oddities of the EU system

National trademarks within the European Union supposedly offer the same level of protection as the same sign registered as a Community trademark, albeit for a limited territory. But some oddities in the system mean that, in the case of Benelux, a national registration may offer more possibilities than a Community one
Kasper Radstake and Pieter de Ruijter

Brands from the frontline

The tendency to use descriptive terms to designate new products is something all in-house counsel must work against, but the problem is particularly acute in the food industry, where marketeers justify such use by saying that consumers want to know where their food comes from
Tove Graulund

The view onlineKeying in on potential liability

The truth about trademarks in China

Probably no country in the world has had its trademark regime more heavily scrutinized than China. Even so, it can be hard to separate fact from fiction. In this roundtable, four experts give it a go