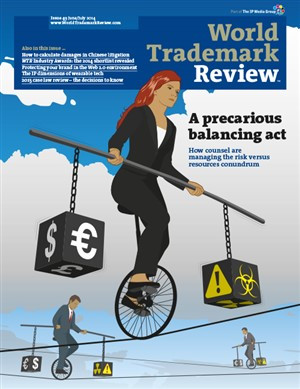 Inside track: how IPOS is supporting the trademark ecosystem

Daren Tang, deputy chief executive of the Intellectual Property Office of Singapore, charts the evolution of the office and explains why trademarks remain the workhorse of the registry

When the sums don’t add up

While some trademark teams have finally seen budgets improve over the last year, for many the situation remains straitened. The challenge for them is clear: ensuring that reduced spend and new enforcement approaches do not lead to significantly increased risk
Trevor Little

When comparison steps over the line

With comparative advertising disputes on the rise, the need has increased for a statute that codifies and consolidates the fundamental principles, exceptions and defences to this form of marketing
Archana Sahadeva and Deepthi Mary Alexander

How design patents complement trademarks in the fashion brands armoury

In the continuing battle against counterfeiting, fashion designers are increasingly turning to design patents to improve protection for their products. Such patents can act as a new weapon in litigation, provided that they meet certain requirements
Véronique Dahan

In November 2013, WTR Daily reported on a Beijing higher court ruling which held that the distinctiveness of a trademark consisting of foreign words should be assessed on the basis of the general knowledge of the relevant public in China
Jiang Nan and Yunquan Li

Industry focus: the sweet smell of success for confectionery trademarks in the Middle East and North Africa

The Middle East and North Africa is a lucrative but competitive market for confectioners, with cases fought over the tiniest elements of packaging. Global brands should familiarise themselves with the similarities – and differences – between local regimes before diving in
Zeina Salameh

The building blocks of change

A number of decisions in 2013 indicate significant progression in the trademarks debate in Brazil; it is to be hoped that these developments become sound foundations for future achievements
Rafael Lacaz Amaral and Rafael Salomão SR Aguillar

The relationship between rights holders and lawyers – whether in-house or part of an IP firm – has been transformed in the last few years by technological developments and shifting attitudes, causing some rights holders to question how best to manage their portfolios
Arlette Molenaar

Time to break some trademark rules in 2014?

The increasing practice of brand owners ‘verbing up’ their own marks and in some cases deliberately disrupting their own logos demonstrates that strong brands can be flexible, fluid and living
Andrew D Price and Justin Pierce

With signs that the courts are adopting a more restrictive approach towards trademark rights, there have been some clear challenges for brand owners in protecting their marques
Gaelyn Scott

Wearable tech: technology – and IP – get a fashion makeover

The emergence of wearable-tech products has given rise to a number of legal issues, particularly in relation to data protection and privacy, but also with regard to how innovative companies can protect and enforce their rights in products
Anna Reid and Matthew Dick

Preparing for the future

It is a time of great change in Canada, with key decisions and developments through 2013 paving the way for a broadening of the definition of trademarks and the augmentation of border enforcement
Sangeetha Punniyamoorthy and Henry Lue

Inside track: how IPOS is supporting the trademark ecosystem

Daren Tang, deputy chief executive of the Intellectual Property Office of Singapore, charts the evolution of the office and explains why trademarks remain the workhorse of the registry
Trevor Little

The Supreme Court turns its attention to trademarks

How Chinese courts are ratcheting up damages awards for wilful infringement

While some feel that damages awards in China are still insufficient, recent cases show that the courts are becoming much more sophisticated in calculating damages and awards are increasing – especially in cases of wilful infringement
Jerry Xia and Jing He

The World Trademark Review Industry Awards 2014 – to be presented at an exclusive ceremony in the owners box at the historic Happy Valley Racecourse in Hong Kong, timed to coincide with the 136th International Trademark Association annual meeting – honour leading trademark teams and individuals across a range of business sectors. In this issue, we reveal the shortlist

From Superman to the legislature – trademark developments in Australia

Striving for clarity in Europe

Although trademark law in Europe was harmonised more than 20 years ago, recent decisions suggest that the ECJ is still deciding questions of interpretation of fundamental issues such as the meaning of ‘due cause’ and ‘bad faith’
Peter Brownlow and Audrey Horton

Getting more bang for your buck

The US government’s announcement that it intends to transfer responsibility for Internet Assigned Numbers Authority functions to the internet community was one of the big talking points at ICANN 49, held in Singapore in March. However, other issues of significance for trademark owners were also discussed – not least the Trademark Clearinghouse’s (TMCH) revelation that it had delivered over 500,000 claims notices as of March 25, with 95% of the queries for trademark terms that triggered claims notices not being followed through to a live registration. According to the TMCH, the fact that around 475,000 applications were dissuaded from progressing to registration was evidence that “the deterrent is working”.

Enemy at the gates

US Immigration and Customs Enforcement’s Homeland Security Investigations and US Customs and Border Protection have released their counterfeit and pirated goods seizure statistics for fiscal year (FY) 2013. Some of the key figures are represented below.

Crowell & Moring LLP has announced the addition of partner Lora A Moffatt to the firm’s IP group at its New York office.

ECJ considers revocation of trademark due to inactivity of owner

In Backaldrin Österreich The Kornspitz Company GmbH v Pfahnl Backmittel GmbH (Case C-406/12) the European Court of Justice (ECJ) has ruled, on a reference for a preliminary ruling from the Austrian Supreme Patent and Trademark Court, that a trademark is liable to revocation in respect of a product for which it is registered if, in consequence of acts or inactivity of the rights holder, it has become the common name for that product from the point of view solely of end users of the product.

A number of national offices have expressed their opposition to the European Commission proposal that ex officio examination of relative grounds be abandoned.

In H-D USA LLC v Berrada (2014 FC 207) the Federal Court of Canada has held that Harley- Davidson may sell its Screamin’ Eagle clothing in association with its well-known HARLEYDAVIDSON mark, despite another party’s trademark registration for SCREAMING EAGLE for retail clothing stores.

Advocate General Wathelet has issued his opinion in Karen Millen Fashions Ltd v Dunnes Stores (Case C‑345/13), stating that Article 6 of the EU Community Designs Regulation (6/2002) must be interpreted as meaning that, in order for a design to be considered to have individual character, the overall impression that the design gives to the informed user must be different from that given to such a user by one or more earlier designs taken individually and viewed as a whole, not by an amalgam of various features of earlier designs.

Setting a precedent with anti-dilution protection

Infringement from a digital wallet

After a slow start, digital crypto-currency Bitcoin is taking the world by storm. Amid concerns that virtual currencies pose a major money-laundering threat and a danger to national economies, World Trademark Review suggests that trademark counsel should also keep them on their radar

“Since the Philips/Nokia ruling (C‑446 and 495/09) in 2011, under EU law European Customs can check counterfeit goods transiting through the EU but can only stop them if there is a risk of these goods entering into the Single Market. This means in practice that customs are powerless against counterfeit goods on route to a third country, and must let them go, at the risk of these goods being illegally diverted back into the EU. The new provisions adopted today will allow Customs to stop trademark counterfeit goods even if destined to a country outside the EU, and will not affect the trade of legitimate goods under the EU’s WTO international obligations. Likewise, these provisions ensure that genuine generic medicines will reach their final destination. With this vote, the European Parliament signals that it is serious about stopping trademark counterfeits to protect consumers everywhere and that the EU should show leadership in the global fight against counterfeiting.”

What will the devolution of Scotland from the United Kingdom mean for IP rights?

Opposition proceedings in Italy are limited in order to exclude protection of extremely well-known trademarks beyond the concept of likelihood of confusion, but there are avenues open to trademark owners
Alessandro Mannini

Well-known trademark status offers useful protection, but securing it in China can be an uphill battle
Brandy Baker

Trademark owners should apply to register their famous marks now, to be able to take advantage of the incoming customs regime
R Scott MacKendrick

Turkish law does not define a ‘well-known mark’, but such status is nonetheless available to rights holders and filing a separate application for well-known status before the Turkish Patent institute is recommended
Ersin Dereligil

Polish law does not set out regulations for famous trademarks, but protection is nonetheless available
Aleksandra Kryska

Well-known trademarks are protected in Romania, but a number of court decisions have highlighted inconsistencies in approach
Dragos M Vilau and Ionut Lupsa

Protecting your brand in the Web 2.0 environment