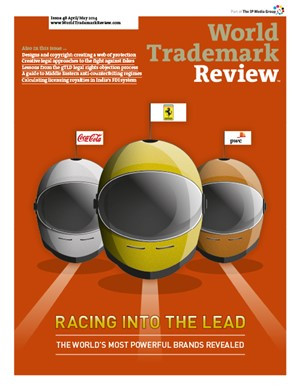 As senior vice president of intellectual property at Fox Entertainment Group, Mei-lan Stark oversees a vast international trademark portfolio and over the next year she will also be serving as INTA president. She outlines her goals for the association and explains how her corporate experience has prepared her for the battles ahead

Art and advertising – are they compatible?

The advertising world has long drawn inspiration from great works of art. However, advertisers need to ensure that they secure the right permissions to use artworks in ads, including moral rights, which have no equivalent in trademark law
Delphine Brunet-Stoclet and Marie André-Nivet

Parody trademarks and the IP High Court – the Japanese experience

Under Japanese trademark law, the mere fact that a mark is a parody makes no difference when it comes to registrability. Applicants for parody marks should thus pay particular attention to issues of similarity, as well to the original mark’s level of fame
Ai Nagaoka

Designing, registering and promoting a trademark is only half the job. A successful mark runs a greater risk of becoming generic, and it is the rights holder’s responsibility to police the mark in today’s increasingly complex digital landscape
Robert BG Horowitz

Colour marks in the United States and the European Union: history, landmarks and evolution

Companies are increasingly making deliberate and consistent use of colours and colour combinations. While fears over monopolisation once impeded progress, today the US and EU colour mark doctrines strike a balance between protection and competition
Stefan Völker and David J Kappos

Prosecuting counterfeiting and organised crime: the need for a creative legal approach

Domestic laws do not always acknowledge the serious and international nature of counterfeiting offences. However, creative use of two UN conventions can allow prosecutors to tackle counterfeiting as an aspect of transnational organised crime
Stefano Betti and Rosella Mangion

After the turbulence of the last few years, the value of intangible assets is once again surging upwards. While the United States, Germany, Japan and the United Kingdom continue to show growth, this trend has been helped by strong performances in China and Korea
David Haigh

How to protect packaging under Chinese law

While passing off is on the rise in China, legal instruments are available to guard against it. A coordinated strategy should use different IP laws to provide comprehensive protection
Valentin De le Court

Anti-counterfeiting in the United Arab Emirates, Oman and Jordan

As global trading hubs with relatively young trademark regimes, Middle-Eastern countries are a tempting route for counterfeiters. However, proactive governments and rights holder involvement are preventing the region from becoming a soft target
Munir Suboh and Manel Ben Said

Since the abolition of royalty caps, there has been uncertainty as to how much Indian subsidiaries can pay their parent companies to license intellectual property. Two cases offer some useful guidance in this sensitive area
Cyril Abrol and Samridh Bhardwaj

As the next round of applications for generic top-level domain hoves into view, it is worth examining the legal rights objection which can be levelled against applied-for domains and analyse how this has been administered by the World Intellectual Property Organisation
Scott Harlan and Brian J Winterfeldt

As senior vice president of intellectual property at Fox Entertainment Group, Mei-lan Stark oversees a vast international trademark portfolio and over the next year she will also be serving as INTA president. She outlines her goals for the association and explains how her corporate experience has prepared her for the battles ahead
John van der Luit-Drummond

While trademarks, designs and copyright are distinct rights with different functions, they are all still IP rights. Bearing all three in mind can allow practitioners to use them symbiotically and should help to avoid any unpleasant surprises
Iona Silverman and Birgit Clark

ECJ provides guidance on ‘due cause’ under Article 5(2)

In Leidseplein Beheer BV v Red Bull GmbH (Case C-65/12), the European Court of Justice (ECJ) has provided guidance on what is considered ‘due cause’ under Article 5(2) of the First Trademarks Directive (89/104/EEC).

The first seven of Donuts’ new generic top-level domains (gTLDs) opened for public registration in January, marking the first opportunity to gauge the appetite – and how brand owners are strategising – for the online expansion. The world’s leading brands seem to be evenly split between those which opted for inclusion on Donuts’ domain protected marks list (DPML) and those initially choosing to wait and watch.

In Blomqvist v Rolex SA (Case C-98/13), the ECJ has held that customs authorities may seize counterfeit goods bought by consumers in the European Union, for their own use, through an online sales website and imported from outside the European Union.

The International Trademark Association (INTA) has published its 2014-2017 strategic plan, setting out its core goals for the next four years. The plan suggests that the association’s focus will become more outward-looking, with consumer protection central to its activities.

In Société des Produits Nestlé v Cadbury UK Ltd ([2014] EWHC 16 (Ch)), which involved the registrability of the shape of Nestlé’s Kit Kat chocolate bar as a UK trademark, Justice Arnold has referred questions to the ECJ for a preliminary ruling.

In Margarete Steiff GmbH v OHIM (Cases T-433/12 and T-434/12), the General Court has upheld two decisions of the First Board of Appeal of the Office for Harmonisation in the Internal Market (OHIM), finding that Margarete Steiff GmbH’s Community trademark applications for two position marks were devoid of distinctive character.

Carina M Tan has joined Sheppard Mullin Richter & Hampton LLP as a partner in the firm’s IP practice group, based its Palo Alto office. Tan joins from Reed Smith * Tao Xinliang, head of the IP department of Dacheng Law Offices’ Shanghai office and dean of the School of Intellectual Property of Shanghai University, has been appointed part-time professor of the National Institute for Lawyers.

“This is going to be an exciting year for the global trademark community. Trademarks play such an important role in our lives. As shown in the 2013 Brand Report published by the World Intellectual Property Organization, consumers rely on trademarks to shop with confidence. Globalization and the Internet are enabling brands to reach more consumers in more places, and the need for legal protection of trademarks—for both brand owners and consumers—has never been greater. This year we will endeavor to enhance and expand our relationships with all stakeholders in IP, especially among governments and government agencies, trade associations, bar associations, and other external constituencies, so that the societal value of trademarks is understood far and wide.”

Social app Weixin, known in English as WeChat, is taking China by storm, as users migrate from other social media offerings. But where users go, infringers follow – so trademark counsel should keep this new platform on their radar and prepare their policing strategies accordingly

As jurisdictions align their trademark regimes with international standards and exciting economic developments unfold across the region, interest in Asia-Pacific is at an all-time high
Virna Chung

While an anonymous $5.8 million donation to the African Regional Intellectual Property Organisation (ARIPO) Office should help with its long-overdue automation programme, doubts remain about the effectiveness of ARIPO trademark registrations
Wayne Meiring

When the battle heats up According to the principles of traditional Chinese medicine, excessive heat can harm the body. A case involving the brand 王老吉 seems to prove this theory well
Gloria Q Wu

Adapting to current advertising realities As online retail grows, so too does the role of online advertising. As businesses become increasingly reliant on this form of advertising it is important to note the specific rules that apply
Ellen Hughes-Jones and Jonathan McDonald

Avoiding advertising abuse There are many obstacles to enforcement of the comparative advertisement regulations, but the government has made efforts to prevent consumers from being misled
Daniela Gutierrez

Don’t believe everything you read Recent reports that a broader tolerance for comparative advertising would be allowed in Turkey were slightly misleading. However, Turkey is ultimately expected to follow the EU regime
Ersin Dereligil

A special place for comparison Comparative advertising is permissible in Poland, but strict rules must be followed
Katarzyna Melgies

Reviewing regulator action As well as civil remedies, complainants in Canada can also turn to a regulator and request that it investigate and pursue available remedies
Jennifer McKenzie and Tamarah Luk