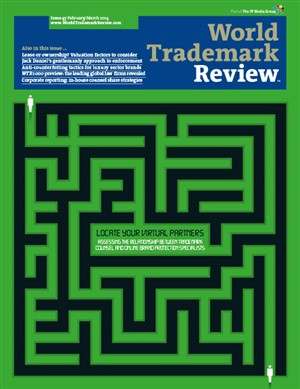 The Office for Harmonisation in the Internal Market’s latest study, European Citizens and Intellectual Property: Perception, Awareness and Behaviour, polled 26,500 European consumers on their attitudes to intellectual property. Drilling down, the report offers important insights into attitudes towards counterfeit products. Some of the key findings are represented below

A corporate trademark function needs to be well positioned in order to best serve its internal clients, communicate with colleagues in other departments and reach the ear of senior management. But as trademark counsel from several different sectors reveal, there is no one-size-fits-all solution
Jack Ellis

WTR asked a range of trademark professionals, industry representatives and legal specialists to highlight the issues that they felt were most significant in 2013, either in their own jurisdiction or internationally, and what they anticipate will be major developments in 2014
Trevor Little

Responding to the hidden threat: how luxury brands are fighting back against counterfeiting

While the luxury goods industry is booming, this success only makes it a more attractive target for counterfeiters. The good news is that there are increasing opportunities for luxury brand owners to engage in international anti-counterfeiting efforts
Mark Young, Louise Nash and Gina M Vetere

Private investigators play an essential role in the identification and removal of counterfeit goods from the market. WTR asked several specialists for their advice on how brand owners can maximise the benefits of their relationship and investigation results
Trevor Little

The Office for Harmonisation in the Internal Market’s latest study, European Citizens and Intellectual Property: Perception, Awareness and Behaviour, polled 26,500 European consumers on their attitudes to intellectual property. Drilling down, the report offers important insights into attitudes towards counterfeit products. Some of the key findings are represented below
Trevor Little

How strong is Fortress Europe? Big brands and the exasperated state of EEA exhaustion

Europe’s trademark exhaustion regime is by no means straightforward and can pose particular problems for major brands seeking to manage complex multi-level distribution chains for their goods into and around Europe
Mark Heritage, Pål Tonna and Simon Tracey

The next edition of the World Trademark Review 1000, released in January 2014, comprehensively identifies the world’s leading trademark firms and practitioners. In this preview, exclusive to WTR subscribers, we identify the firms which have achieved a listing in more than one region, as well as those which are home to the largest numbers of independently recommended practitioners
Mary Hawkins, Nicholas Richardson and Simon Messenger

Trademark restrictions in Southeast Asia: a perspective from Thailand, Vietnam and Indonesia

More than a game: brand and trademark use in video games and virtual worlds

Protecting and enforcing trademark rights in video games and virtual worlds is becoming increasingly complex. Publishers and developers must make reasoned decisions as to what third-party materials they incorporate, while rights holders work out how best to protect their marks
David L Anderson

Luxury brand diffusion lines contravene received wisdom that mass-marketing luxury products risks making a brand lose focus, and thus exclusivity and clientele. While the short-term results of diffusion lines seem positive, it will be interesting to see how the long-term effects play out
Fabrizio Jacobacci and Lauren Keller

While a slogan can be a key part of a brand’s identity, rights holders need to consider several factors when developing and protecting them. However, it is well worth the time and effort required to protect and enforce these highly effective advertising tool
Christina L Martini

Estimating and managing the economic impact of brand disparagement

Whether it is McDonald’s dealing with allegations of bad ingredients or the new owner of the local deli dealing with outdated negative reviews on Yelp, businesses rely on their brands for success and can be damaged by unfounded rumours affecting their reputation
Brian Buss and Doug Bania

Lease versus ownership – how to establish comparability in trademark valuation

The values of trademark licences and ownership are surprisingly difficult to compare, even though they are based on the same asset. A survey of both kinds of transaction examines the reasons for the disparities and the ways in which trademark appraisers can be more accurate
Christof Binder

Preparing for a multi-dimensional future

As the date on which China’s new Trademark Law will take effect draws near, brand owners are taking a long, hard look at their portfolios to work out what steps they will need to take to protect their rights – particularly rights in 3D marks
Rhonda Tin and Ai-Leen Lim

Protecting pharmaceutical marks in the Middle East is a challenging, labour-intensive process, which requires special consideration and handling. However, with high imports of branded drugs and soaring growth, this is not a market that rights holders can afford to ignore
Ghaida Ala'Eddein

As more brand owners take to policing app stores for infringing offerings, it is useful to understand the nature of the challenge faced – and which industries are particularly at risk
Fenn Hoffman and Reggie Pierce

Challenges in creating and managing an Indo-international joint venture brand

When assessing future partnerships, it is worth considering some the biggest and most popular joint ventures between Indian and international brands, and the challenges that they have encountered
Saurabh Uboweja

In JW Spear & Sons Ltd v Zynga Inc ([2013] EWHC 3348 (Ch)) the Chancery Division of the High Court of England and Wales found that Zynga Inc’s use of the words ‘Scramble With Friends’ for a mobile app game did not infringe Mattel’s SCRABBLE marks.

On November 25 2013 a study entitled “European Citizens and Intellectual Property: Perception, Awareness and Behaviour”, prepared by the European Observatory, was officially presented at the European Parliament. The study provides a comprehensive assessment of EU citizens’ perceptions of intellectual property and its infringements, from both a qualitative and quantitative point of view.

The sunrise periods for a number of new generic toplevel domains (gTLDs) have officially opened.

In Starbucks (HK) Limited v British Sky Broadcasting Group Plc ([2013] EWCA Civ 1465) the Court of Appeal of England and Wales upheld a High Court decision finding that the CTM NOW, owned by Starbucks (HK) Limited – a Hong Kongbased media group unrelated to the coffee shop chain – was invalid, and that Starbuckshad no goodwill in the United Kingdom that would give it the right to prevent BSkyB from using the name NOW TV in relation to its internet protocol television service.

Burberry, the United Kingdom’s largest luxury goods manufacturer, has appealed a decision of the Trademark Office of the People’s Republic of China to revoke the trademark for its iconic tartan, known as the ‘Haymarket Check’. The decision, which relates to leather goods only, will not take effect before the appeal is heard.

General Court decision set aside for failure to follow Intel

In Environmental Manufacturing LLP v Office for Harmonisation in the Internal Market (OHIM) (Case C-383/12 P), the European Court of Justice (ECJ) set aside a decision of the General Court on the grounds that the latter had dismissed the assessment of the risk of dilution set out in Intel (Case C-252/07).

Wearable technology is on the verge of a significant leap forward in terms of both the technology itself and the potential user base. While the trademark dimensions will only become apparent once adoption is widespread, now is the time for counsel to prepare

In their own words

What can trademark coexistence agreements learn from patent settlements?

While the rights protecting trademarks and patents serve different purposes, general doctrines relating to competition law and patent settlements could apply by analogy to coexistence agreements and provide useful guidance to prevent them from contravening competition law
Nancy G Gerakini

Branding in the pharmaceutical industry has its challenges. Restrictions on advertising and promotion are an obvious impediment to the building of brand recognition. Purchase decisions are influenced not only by consumers, but also by prescribing doctors and pharmacists. Further, in order to take advantage of the limited patent protection period, product managers often choose a trademark or brand name that is influenced, to a large extent, by the principal ingredient in the drug or the ailment that it is intended to treat. The objective is to create better brand recall so that doctors, pharmacists and patients can easily associate the mark or name with the product’s principal component or ingredient or the ailment which it is intended to treat, thus making it an easier sell.
Manav Kumar and Ranjan Narula

The Turkish Patent Institute is the only authority that can grant registration of trademarks in Turkey. However, no medicinal product can be marketed without authorisation from the Ministry of Health.
Ersin Dereligil

Contrary to applicable practice in other countries such as the United States, Article 87 of the Mexican Industrial Property Law establishes that in Mexico, the right to obtain exclusive use of a mark is obtained through registration and not through use or priority adoption. Therefore, it is necessary to file an application before the Mexican Trademark Office (MTO), part of the Mexican Institute of Industrial Property (IMPI), complying with the requirements established by Article 113 of the law.
Barbara Dueñas

UK trademarks are regulated under the Trademarks Act 1994. Further guidance and regulation for pharmaceutical products are provided by the Medicines and Healthcare Products Regulatory Agency (MHRA), while the European regulator is the European Medicines Agency.
William Haig and Ben Goodger

This article highlights some considerations relating to trademark usage standards, clearance and prosecution that pharmaceutical firms and their advisers should bear in mind during the drug branding process in the United States.
Patrick J Concannon

According to information available from the Federal Ministry of Economics and Technology website, for many years the Germany pharmaceutical industry has played a significant role on the world stage. In 2011 898 companies were registered as pharmaceutical companies in Germany, of which 269 had more than 20 employees. That same year, revenues amounted to €39.2 billion – an increase of 4.5% on the previous year. The country’s pharmaceutical industry employed 105,400 staff in 2011 and exported pharmaceuticals with a total value of €50.4 billion. In sales terms, Germany is the world’s third largest pharmaceutical market.
Oliver Nilgen

The third amendment to the Trademark Law, which will take effect on May 1 2014, has brought about changes to both the procedural and substantive aspects of trademark practice in China, and some may influence the protection of pharmaceutical marks. Since the law has not yet come into effect, the cases cited here were all decided under the law before its amendment, but this article also discusses potential expected changes to similar cases in future.
Gloria Q Wu

Opposition proceedings against trademark applications filed in Italy and against Italian designations for registration of international trademarks reveal the methods used to examine possible likelihood of confusion based on the different products or services claimed and on the different characteristics of target consumers.
Nicola Tarantini

In Canada, the selection of a brand name for a prescription drug must be assessed bearing in mind both regulatory issues handled by Health Canada and trademark registration issues pursuant to the Trademarks Act. If a product name is approved by Health Canada, it does not necessarily follow that the name will be registrable as a trademark; and similarly, if a name is found to be registrable as a trademark, this does not mean that the name will be accepted by Health Canada. Health Canada considers the issue of drug name confusion from a health and safety perspective. By contrast, the selection of a trademark under the Trademarks Act focuses on the likelihood of confusion as to the source of manufacture of the products.
Susan J Keri