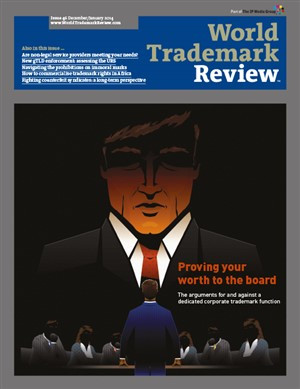 How trademarks are shaping Europe’s economy

The European Commission has published “Intellectual Property Rights-Intensive Industries: Contribution to Economic Performance and Employment in Europe”, a study carried out by the Office for Harmonisation in the Internal Market and the European Patent Office into the economic impact of intellectual property across the continent. Some of the key findings are represented below

WTR asks users to have their say on how the nonlegal trademark services industry is meeting their needs, and asks vendors to respond to user concerns and requests
Trevor Little

Proving your worth to the board

The drive to cut costs has led some companies to downsize their trademark team – or to dismantle it altogether and transfer its responsibilities to the wider IP or legal department. WTR asks three in-house practitioners to consider the arguments for and against a dedicated corporate trademark function
Jack Ellis

Navigating the Foreign Corrupt Practices Act in the IP Context

Although IP business practices have not been a traditional area of Foreign Corrupt Practices Act enforcement, a number of the high-risk areas apply in the IP context. Counsel should thus take care to establish procedures to mitigate such risks
Joshua C Foster and Guy D Singer

Exploring the URS as a trademark enforcement option for new gTLDs

The Uniform Rapid Suspension system, and its big brother the UDRP, are the key tools available to trademark counsel to help to stem the tide of infringement in new gTLDs. However, it is crucial to identify the pros and cons of each – and follow the rules carefully
Brian Beckham

The latest amendments to the Trademark Law introduce several key changes, including writing the principle of good faith into the law in an attempt to stamp out bad practices such as counterfeiting and trademark squatting
Hu Gang

MARQUES: looking ahead to new challenges

WTR presents the highlights from this year’s MARQUES annual conference, which offered an intriguing glimpse at the future of trademark practice
Trevor Little

Singapore's IP Hub Master Plan - what does it mean for trademark practitioners?

The IP Hub Master Plan is designed to turn Singapore into a global IP hub. While the main thrust of the report is innovation and patent protection, some recommendations in the report will also impact on trademark-focused businesses
Angeline Lee

Brand commercialisation strategies for the Middle East and North Africa

Global brand owners are increasingly partnering with Middle East and North African companies in order to gain a foothold in these emerging markets. However, such arrangements present pitfalls as well as opportunities
Dema Abu-Zulekha, Charles Shaban and Renad Al-Noubani

Counterfeiting syndicates in Asia are difficult to identify, trace and dismantle, posing the question of whether it is wiser to continue cracking down on illicit activities as and when they are discovered, or to play a strategic long game with the aim of shutting down production at source. WTR investigates
Seher Hussain

How trademarks are shaping Europe’s economy

The European Commission has published “Intellectual Property Rights-Intensive Industries: Contribution to Economic Performance and Employment in Europe”, a study carried out by the Office for Harmonisation in the Internal Market and the European Patent Office into the economic impact of intellectual property across the continent. Some of the key findings are represented below
Trevor Little

Social media and IP infringement in India: preparing for action

As take-up of social media continues to rise in India, rights holders are enthusiastically exploring this new avenue for promoting brands. However, they should also be aware that social media is yet another platform on which their intellectual property can be infringed
C A Brijesh and Anukriti Pareek

Africa is not a region for the fainthearted, but considerable opportunities await the canny investor. The quirks and challenges of this region make it vital that local counsel be engaged to ensure that rights are properly protected
John Ndlovu and Darren T Olivier

Watch your mark – navigating the prohibitions on immoral, scandalous and disparaging trademarks

While a cheeky double entendre might once have been allowed registration, a recent Federal Circuit decision appears to signal that such days are over. Applicants for borderline marks should consider all potential interpretations, as well as the context in which their marks might appear
Jennifer Barry, Tim B Henderson, Perry J Viscounty and David D Troutman

Has the ECJ's expanded list of functions widened the scope of trademark protection?

While the dust settled on the L’Oreal v Bellure decision some time ago, clarification is still needed on recognised functions of a trademark. Without this, there is a danger that the treatment of marks will run contrary to the core purpose of trademarks as economic tools in an effective competitive marketplace
Kaisa Mattila and Sarah Wright

With the East African Community currently failing to make a meaningful impact on the import and distribution of counterfeit products, there are a number of strategies available to brand owners to take effective action in the fight against fakes
Wayne Meiring

In Société des Produits Nestlé SA v Cadbury UK Limited, the Court of Appeal of England and Wales has overturned a decision of the trial judge allowing the registration of Cadbury’s trademark for the colour purple in respect of its milk chocolate confectionery.

In Martin y Paz Diffusion SA v Depuydt (Case C-661/11), in a reference for a preliminary ruling from the Belgian Court of Cassation, the European Court of Justice (ECJ) has clarified the nature of ‘consent’ to use a registered trademark under Article 5(1) of the EU First Trademarks Directive (89/104/EEC).

The European Commission has published a study on the economic impact of IP across the European Union.

Applicants for generic strings have clarified their intended use of the top-level domains (TLDs) that they seek to operate. This came a day after the Internet Corporation for Assigned Names and Numbers (ICANN) revealed that some stalled applications can proceed to delegation if the applicant blocks certain secondlevel domains while further assessment is carried out. In other gTLD-related news, Google has launched its online domain registry, Charleston Road Registry.

ECJ: Board of Appeal has discretion to consider late-filed evidence

Following years of deliberation, the Standing Committee of China’s National People’s Congress has finally approved the amendments to the Trademark Law. The amendments will come into force on May 1 2014.

The Common Economic Space - an Eastern response to globalisation

The Customs Union – which includes Russia, Belarus and Kazakhstan – has just signed an agreement on a new unified system for trademarks. The agreement should make it easier and cheaper for rights holders to register and enforce their marks across member states
Elena Solovyova

It is over a year since the launch of Nigeria’s online trademark filing system. While supporters have praised the portal for cutting waiting times, reports of technical difficulties and resistance to increased fees suggest that opinions remain divided
Odunayo Ayorinde and Uwa Ohiku

The future of brands and branding might be hard to distil, but while the fundamentals remain the same, it is important that brands follow the latest market trends
Sahil Sachdev and Nick Sims

Central and Eastern Europe offer rich potential for brand owners seeking strategic growth opportunities, but trademark protection needs to top the agenda for those considering expansion in the region. This issue we shine a spotlight on Russia, Poland and Ukraine – large, fast-developing markets ready to be tapped by ambitious brand owners
Nicholas Richardson

Although Mexican law grants protection to some non-traditional marks, it requires updating in order to meet modern demands
Ana Soto

Although some non-traditional marks are protectable in Vietnam, there are still concerns about their registrability and enforcement
Le Quang Vinh

A recent landmark decision, focused on the Carneval biscuit, offers important insight into the treatment of product appearance in Finland
Jukka Palm

Reflecting the current trend towards the use of less conventional signs, the Romanian trademark office is open to the registration of non-traditional marks – with certain caveats
Dragos M Vilau and Ionut Lupsa

Patent Office practice in relation to non-traditional trademarks has been relatively poor. However, it is hoped that within the next few years, things will improve
Aleksandra Kryska

The requirements to demonstrate distinctiveness at filing, as applied by the Canadian Trademarks Office, pose a significant obstacle to the registration of non-traditional marks
Cynthia Rowden

Although the non-traditional marks realm remains largely unexplored in China, there is a trend towards broadening the scope of protection to include such marks
Brandy Baker

Non-traditional marks are gaining acceptance in India, and trademark laws and procedures are evolving with time. Overall, the future seems promising
Rachna Bakhru

If practitioners can avoid registration refusals based on functionality and lack of distinctiveness, the liberal US regime for non-traditional marks provides brand owners with an opportunity to strengthen goodwill
David Greenbaum

Non-traditional marks are afforded protection in Italy, but there are challenges to registration
Simone Verducci-Galletti and Donatella Prandin