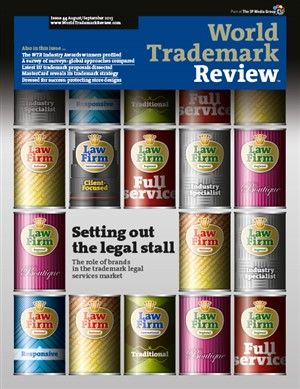 As the way in which people shop evolves, so too do
the offerings of leading financial services providers.
Head of IP at MasterCard Worldwide Colm Dobbyn
reveals how he ensures that the company’s trademark
strategy keeps pace with change

A proposed new law would make it illegal
to purchase counterfeits in New York City.
The measure might seem radical until
you count up the damage wreaked by
counterfeits – not only for brand owners,
but for consumers as well

From filing agency to enforcer

When surveying the US legal
services market, it is important
to assess both national and
regional trends

In issue 42 of WTR, a feature focused on the
issue of trademark bullying. Deborah Cohn,
the commissioner of trademarks at the US
Patent and Trademark Office, contacted us
to respond to the article and outline the
agency’s ongoing efforts to address this
controversial subject

Can retail store designs be protected as trade dress or 3D marks?

As Apple breaks new ground by registering the design
and layout of its stores in the United States, this article
analyses how the tech giant procured trade dress
protection for its stores and discusses how Europe is
reacting to the development

Teresa A Lee and Simon Tracey

Survey evidence around the world – a comparative analysis

While survey evidence has an important role to play in trademark disputes,
the rules vary depending on jurisdiction. This article examines how
survey evidence in trademark disputes is treated by courts in five different
jurisdictions. It is clear that survey evidence still has an important role to
play in trademark cases, but that its use is more strictly controlled in some
territories than others – in particular, the United Kingdom and Australia.
Common themes emerge across jurisdiction – notably, that transparency
in dealings is a laudable aim, with surveys being shared with opposing
parties before trial. Cooperation between the parties is encouraged where
possible, while courts are keen that parties avoid excessive costs in relation
to gathering survey evidence.

On May 7 2013, WTR announced the winners
of its seventh Industry Awards at an exclusive
ceremony at the stunning Belo Mansion in the
heart of the Dallas Arts District. The awards
are designed to recognise the vital work
carried out by in-house trademark counsel,
and identify the teams and individuals that
are performing their functions to the highest
possible standards. Over the following pages
we speak to the winners and explain why they
were judged to be leading examples of industry
best practice.

The good, the bad and the missing in the plans for Europe

The European Commission has unveiled an ambitious
raft of legislative proposals that would not only shake up
the way that the Office for Harmonisation in the Internal
Market is organised, but also set out to harmonise
trademark law throughout the European Union

On page 72, proposals to revise the EU Community
Trademark Regulation and the EU Trademark
Directive are examined in detail. Following official
publication of the documents, WTR asked a range
of European trademark experts for their reaction to
the content and their thoughts on the likely impact
should the revisions be adopted

From gTLD risks and social media exploitation to brand resilience and the benefits of a fluid approach: inside INTA 2013

WTR looks back at the practical takeaways from this
year’s International Trademark Association annual
meeting, held in Dallas, Texas

With external counsel under acute pressure to provide
a wider range of services at more cost-effective price
points, trademark law firms and practitioners are
increasingly seeking to differentiate themselves on
the market. Are brands the answer?

‘Trademark bullying’ – time to get some clear definitions

While trademark bullying does exist, there is a danger
that using the term too glibly implies that bullying
takes place whenever a large and powerful rights
holder enforces its rights. This article suggests a more
level-headed approach, including the use of precise
definitions

International: This year’s inductees to the IP Hall of
Fame were honoured at an exclusive gala
dinner held in Boston’s Fairmont Hotel
on June 10

Interflora: a victory against the use of trademarks as AdWords?

The High Court of England
and Wales has ruled in the
long-running dispute between
Interflora Inc and Marks &
Spencer (M&S) over the latter’s
use of the mark INTERFLORA
as an AdWord.

In the same week that the
Internet Corporation for
Assigned Names and Numbers
(ICANN) published the first
responses to the recent
Governmental Advisory
Committee (GAC) advice on
the generic top-level domain
(gTLD) programme, Deloitte
revealed that 636 trademark
holders and 119 agents have
registered with the Trademark
Clearinghouse.

Following the decision
of the European Court of
Justice (ECJ) in Chartered
Institute of Patent Attorneys v
Registrar of Trademarks (Case
C-307/10), better know as the
IP TRANSLATOR decision, the
Office for Harmonisation in
the Internal Market (OHIM) has
announced a “breakthrough”
regarding the treatment of
class headings

The US Supreme Court has
decided to take on a case that
could have wide-ranging
implications for brand owners
in the United States.

Fluid trademarks are gaining popularity in China, but a number of grey areas remain

While fluid marks are an eye-catching marketing technique, protection should be obtained for all versions of
any trademarks currently in use or expected to be used in future

While rights holders can freely explore the creative and commercial opportunities presented by the use of a
modified form of their trademark, they would be well advised not to stray too far from the original mark

It is highly likely that fluid marks will become the subject of IP disputes in the near future. Accordingly, brand
owners should consider what combinations of IP right they may be able to use in order to protect them

Before using fluid marks, it is important to discuss the potential impact and take action to prevent the loss of
trademark rights or lengthy and expensive litigation

While new forms of advertising can be engaging, they also pose unique risks from an Indian trademark law
perspective

Creating new images and periodically modifying marks is arguably the best way to focus consumer attention
on specific elements or messages, but caution is needed

@WTR_Alerts What is notable about the Colin the Caterpillar spat is not the dispute itself. https://t.co/07U4pJ4ArX https://t.co/Wi1JVORntu Read more

@WTR_Alerts Where to appeal a TTAB decision? The choice is complicated. https://t.co/K4t1GA8g3W https://t.co/EkHnGQKc1U Read more

@WTR_Alerts “The IP sector is one of the most exciting in the world right now” – Corsearch CEO on acquisition by Astorg.… https://t.co/AvxZt28pwd Read more