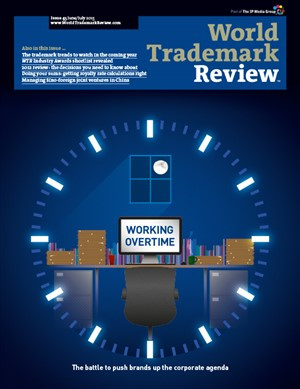 Now in its fifth year, the WTR Global Benchmarking Survey takes the pulse of the industry. While it is true that the hard times are far from over, some positives have come out of adversity – not least a greater corporate appreciation of trademark value. But there’s still plenty of work to be done
Jack Ellis

The trademark landscape is consistently being shaped by political movers and shakers, consumer trends, industry organisations and wider influences. WTR gazes into its crystal ball to see who and what are likely to transform the trademark environment over the next 18 months
Sara-Jayne Clover, Trevor Little and Seher Hussain

Get your head in the cloud

The cloud is an environment that trademark counsel need to monitor. Brand owners will still face the same clearance, prosecution, enforcement and priority issues they have historically faced – albeit in the cloud
Erin S Hennessy and Matt Schneller

This year’s shortlist for the WTR Industry Awards spans the spectrum of trademark-related activity. However, if there is one common trait that our nominees share, it is the value that they are adding to their respective organisations
Trevor Little

Over the last 12 months, the European Court of Justice has provided several clarifications related to both registrations – in particular, the issue of specification of goods and services – and defences against claims for revocation on the grounds of non-use
Emmanuel Baud and Sabine Rigaud

Is the tide turning for trade dress decisions in Brazil?

A string of recent decisions suggests that Brazilian judges are wising up to trade dress infringement. Although damages are still modest, it is hoped that this will also shift within the next few years
Otávio Saraiva Padilha Velasco

Ensuring that a brand is licensed correctly and that an appropriate royalty rate is in place is essential to secure the longevity and success of a business. Correct calculations are therefore critical
Stuart Whitwell

A big year for rights holders in Canada

A groundbreaking verdict from the Beijing High Court could provide crucial guidance on assessing similarity between not only trademarks, but also the goods that they designate. The court found that while due attention should be paid to the official guidance, simple market facts should also be considered
Gang Hu

Brand licensing in the US – advice for Chinese brands

If they are not already, Chinese brand owners are poised to expand westward into the lucrative US market. They will boost their chances of success by taking care to define and differentiate their own products and finding strong US licensees to partner with
Marc A Lieberstein and Linda Du

Over the last year South Africa’s Supreme Court of Appeal has issued several decisions that consolidate an already solid body of trademark case law. There are indications that 2013 could also see it provide muchneeded guidance on tests for confusing similarity when dealing with similar goods and services
Charles Webster

Trademark cases continued to make headlines in China during 2012. Malicious registrations of celebrity names, a multimillion-dollar settlement by Apple and the soft drinks case that sparked a national debate show that trademarks are still big business
Fang Qi

Nike stirs up the opinions from 2012, which suggest discretion may well be the better part of valour

The Supreme Court’s affirmation of the dismissal of Nike’s own infringement suit after Nike had issued a broad covenant not to sue not only allowed the sportswear giant to sidestep an invalidation counterclaim, but also suggests a route whereby rights holders having second thoughts can withdraw to fight a different battle another day
Aryn Emert

Sino-foreign joint ventures are the best way to produce internationally branded goods for middleclass consumers in China. Although the relationship can be tricky to manage, some basic rules can make it harmonious and profitable for both partners
Lei Zhao

2012 Down Under – a sample of interesting cases for brand owners

Parallel imports, overseas brands and the registrability of building names came under scrutiny from the Australian courts last year. As some of these cases demonstrate, the application of even long-established trademark protection principles can evolve
Melissa Corbutt and Karen Hayne

Interflora v M&S: are the days of survey evidence over?

The Court of Appeal of England and Wales has handed down judgment in Interflora Inc v Marks & Spencer PLC ([2013] EWCA Civ 319). This decision – the second judgment of the court in this case on the admissibility of evidence from witnesses identified through surveys – seems to make it even harder to adduce survey evidence in trademark infringement cases.

The Intellectual Property Laws Amendment (Raising the Bar) Act came into effect in Australia on April 15 2013. The most important change is the introduction of a new opposition procedure.

Google has revised its AdWords trademark policy to lift a restriction on using trademarks as keywords in a number of countries. Starting April 23 2013, it will no longer prevent advertisers from selecting third-party trademarks as a keyword in advertisements targeting Australia, Brazil, China, Hong Kong, Macau, New Zealand, South Korea and Taiwan. This means that Google’s AdWords trademark policy is now harmonised worldwide.

The Canadian government has introduced Bill C-56 – the Combating Counterfeit Products Act – which proposes significant changes to the Trademarks Act and Copyright Act. The bill aims to “protect Canadian consumers, Canadian manufacturers and retailers as well as the Canadian economy from the health and economic threats presented by counterfeit goods”, and also provides for the registration of non-traditional trademarks.

The European Commission has published its proposals to amend the EU Community Trademark Regulation (207/2009), the EU Trademark Directive (2008/95/EC) and EU Regulation 2869/95/EC on the fees payable to the Office for Harmonisation in the Internal Market (OHIM). The proposals are designed to “make trademark registration systems all over the European Union cheaper, quicker, more reliable and predictable”.

United Kingdom The UK Intellectual Property Office has launched a consultation to obtain stakeholders’ views on the appropriate procedural changes for the introduction of a fast-track opposition procedure within the Trademark Tribunal. The consultation outlines proposals for the fast-track procedure and seeks views on the introduction of a refundable appeal fee for inter partes appeals to the appointed person. The deadline to submit comments is May 17 2013.

The IP Laws Amendment Act is designed to boost IP protection across the board. Provisions aimed specifically at trademarks include an overhaul of the opposition process, improved border protection measures and the extension of legal privilege to trademark attorneys
Julian Gyngell

The long-awaited regulation for the Ethiopian Trademark Registration and Protection Proclamation means that work can begin on modernising Ethiopia’s trademark regime. However, there may be a few sticking points in the transition – not least the fact that the much-discussed IP Gazette has yet to launch
Wayne Meiring

What the draft agreement on a unitary trademark in Belarus, Kazakhstan and the Russia Customs Union may mean for brand owners
Ignacio Lazaro

International
Recent Federal Court of Justice decisions have held that the validity of a sub-licence is independent of that of the original licence. Rights holders should thus take action to remain in control of their intellectual property
Andreas Kabisch

Licensing can add considerable value to a brand. But some pitfalls must be avoided
Jatinder Bahra and Ben Goodger

Those considering licensing in Poland should acquaint themselves with the country’s specificities – in particular, the issues surrounding rights assignment and termination
Izabella Dudek-Urbanowicz

Finnish games producer Rovio is a prime example of successful licensing with its Angry Birds, using some unorthodox methods along the way
Tarja Tchernych and Paula Sailas

While the legal framework governing trademark licensing in India has been liberalised, brand owners should remain vigilant when drafting their agreements
Ranjan Narula

A licensing agreement in itself offers no guarantee of saving a trademark from the risk of abandonment. The licence must include specific quality control provisions
Jenny Slocum and Perla M Kuhn