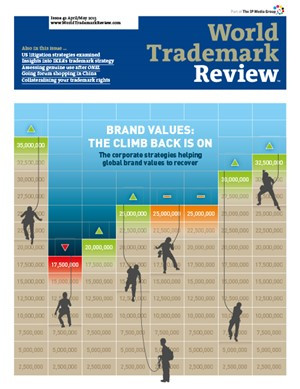 In its efforts to acquire – and resurrect – expired trademarks, a California-based company is calling for reform of the specimen-of-use requirements. WTR speaks to practitioners and the US Patent and Trademark Office itself to investigate whether the process is broken or is alternatively based on a commonsense approach

Putting a price on trademarks: trends in IP valuation and damages calculations

IP valuation is still a controversial issue, with a variety of different methodologies and few hard-and-fast rules. However, US courts appear to be taking a more active role in helping to ensure that damages awards more closely reflect the value of the infringed asset
Weston Anson and David Noble

People power? A survey of surveys

Survey evidence can be a potent weapon in trademark cases. However, not all surveys are equal and none is immune to criticism. Counsel must ensure that surveys are properly designed and conducted so that they can carry their points successfully
Robert W Sacoff

In today’s cost-conscious corporate environment, litigation is usually regarded as a last resort in the event of infringement – but sometimes it is the only available solution. In such cases it is important to ensure that you have the right strategy in place, both to maximise the chances of success and to ensure that resources are properly allocated. Over the following 23 pages, WTR presents an examination of strategies and best practices as they relate to the US litigation landscape.

A game of chess: defending a trademark infringement suit in the United States

Not every defendant is a wrongdoer, and there are a range of tactics that counsel should consider when in a defensive position
Barry L Cohen

Brand values: the climb back is on

Corporate efforts to gain competitive advantage in the midst of a difficult global economy have led to an increased focus on brands – leading to an upswing in brand value as a proportion of total enterprise value. As with any race, however, there are winners and losers
David Haigh

In Leno Merken BV v Hagelkruis Beheer BV (Case C-149/11, December 19 2012) – often referred to as the ONEL decision – the European Court of Justice (ECJ) found that while use of a Community trademark (CTM) in one member state could suffice to establish genuine use in the Community, “all facts and circumstances” should be considered. It ruled out a de minimis rule and suggested that the bar for showing genuine use within the Community will be set somewhat higher than that for showing the same in a specific member state. In addition to the detailed analysis on page 12, WTR asked a number of legal experts for their reaction to the decision

Despite a lacklustre response to the US Department of Commerce report on trademark litigation, bullying is a real problem that disproportionately affects small businesses, and is something that the whole trademark community needs to address
Peter S Sloane

In its efforts to acquire – and resurrect – expired trademarks, a California-based company is calling for reform of the specimen-of-use requirements. WTR speaks to practitioners and the US Patent and Trademark Office itself to investigate whether the process is broken or is alternatively based on a commonsense approach

Plain packaging for cigarettes – Australia leads the way, but will others follow?

While Australia’s Tobacco Plain Packaging Act is the first of its kind, similar rules may be implemented in other jurisdictions before long – and there are even indications that plain packaging rules may be extended to other sectors
Katharine Stephens

On location: forum shopping in China

The prospect of litigating in China can be daunting to say the least, and courts and judges across the country vary widely in their trademark expertise. By following a few select tips, brand owners can ensure that they choose the best venues in which to enforce their rights

Defending a multibillion-dollar global brand in the online age is no easy task. IKEA trademark manager Cecilia Emanuelson reveals how consistency and tenacity are the keys to success, Swedish style

OEM and the concept of ‘reasonable use’ of a trademark

Recent civil decisions involving OEM and trademark infringement have led some to speculate that China’s courts may have departed from their earlier position that OEM of branded goods does not constitute trademark ‘use’. However, a review of the recent cases, together with the Trademark Law and guidance from the Supreme People’s Court, would suggest otherwise
George Chan, August Zhang and Chris Bailey

The use of brands and trademarks as collateral is becoming increasingly common. However, issues such as publicising deals, valuing trademark portfolios and the portability of trademarks remain far from cut and dried
Jens Matthes

Deciding where to file suit in the United States when seeking redress for trademark infringement or unfair competition, or defending against such claims, is a tricky business. Fortunately, there is plenty of case law to provide guidance for potential litigants in choosing a forum
Jonathan Hudis

The new generic top-level domain (gTLD) Trademark Clearinghouse has revealed that the cost of submitting trademarks will be capped at $150 per year.

According to draft European Commission proposals obtained by WTR, the European trademark system is set for a shakeup. A renamed Community trademark (CTM) and Office for Harmonisation in the Internal Market (OHIM), the abandonment of examination on relative grounds and reduced application and renewal fees for CTMs are among the potential changes.

In Already LLC v Nike Inc (Case 11-982), the US Supreme Court has held that a broad covenant not to sue can be sufficient to moot an underlying case or controversy, thereby removing the basis for jurisdiction for a court to decide counterclaims seeking to invalidate a trademark.

ECJ rules on ‘genuine use’ of a CTM

The European Court of Justice (ECJ) has issued its long-awaited decision in Leno Merken BV AG v Hagelkruis Beheer BV (Case C-149/11), better known as the ONEL case, which addressed the requirement for ‘genuine use’ of a CTM. The ECJ held that proof of use of a CTM in one member state can in principle, but will not necessarily, be deemed sufficient to prove genuine use in the Community.

Google not liable for misleading and deceptive ads

The High Court of Australia has held that Google did not engage in misleading or deceptive conduct merely by displaying search results generated by advertisers’ wrongful use of third-party trademarks as Google AdWords (Google Inc v Australian Competition and Consumer Commission ([2013] HCA 1).

The Court of Appeal has offered welcome clarity on whether infringers may deduct general overhead costs from an account of profits in infringement proceedings. The court ruled that these costs can be taken into account only where they are properly attributable to the infringing activity
David Parrish

The Apple v Samsung tablet design disputes have grabbed media headlines across Europe. For trademark counsel, there are a number of important takeaways
Roland Mallinson

The final (?) conclusion of ONEL – one step closer to cracking the ‘genuine use’ nut?

The ONEL decision was much anticipated, the issue of genuine use of a Community trademark long being a hot topic of debate. So is this the end of the discussion or just the beginning?
Sandra R Paulsson

Registering trademarks in Romania is relatively straightforward, as long as the right approach is taken
Dragos M Vilau and Ionut Lupsa

Does the creation of a specialised IP Court shift trademark prosecution towards litigation?
Sanna Aspola and Jukka Palm

It is a common misconception that trademark use without filing an application grants the user rights. In reality, the first-to-file rule makes early registration a must
Markus Mainx

With a rising number of trademark applications resulting in examination delays, it is crucial that brand owners do all that they can to expedite prosecution of their applications
Ranjan Narula and Rajiv Suri

Agile registration strategies are crucial in Russia, with foreign applicants required to be represented by Russian trademark attorneys who are registered at the RPTO
Alexey V Kratiuk

The rush for trademark registration means it is increasingly difficult to register marks in China. However, a number of strategies can be implemented to maximise the chances of success
Gloria Q Wu

The Italian Patent and Trademark Office is taking great strides in its aim to make its offerings more efficient and effective, not least through the introduction of an oppositions procedure
Simone Verducci-Galletti and Donatella Prandin

Efforts continue to streamline the Canadian trademark system and bring it into line with international practice, but it could still be some time before proposed amendments are implemented
Terry Edwards and Meghan Dillon