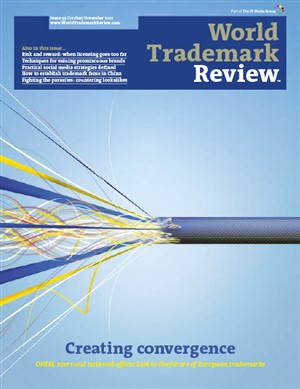 For the past six years, the October/November issue of WTR has taken an in-depth look at the Office for Harmonisation in the Internal Market (OHIM), seeking the views of the top representative filers and then asking OHIM to respond to user queries. This year, the research has been expanded to include the views of brand-owning filers on what has been another busy year in Alicante

For the past six years, the October/November issue of WTR has taken an in-depth look at the Office for Harmonisation in the Internal Market (OHIM), seeking the views of the top representative filers and then asking OHIM to respond to user queries. This year, the research has been expanded to include the views of brand-owning filers on what has been another busy year in Alicante
Trevor Little

Talking Point: Genuine use in the Community

Advocate General Sharpston’s opinion in Leno Merken BV v Hagelkruis Beheer BV (Case C-149/11) stated that the “use of a CTM within the borders of a single member state is not, of itself, necessarily sufficient to constitute genuine use of that trademark, because the territorial scope of the use is merely one of the factors to take into account in the assessment”.
Trevor Little

Are iPAD and GOOGLE in danger of going the way of zipper and cellophane? Time to assess the true risk of genericide
Susan Okin Goldsmith

The promiscuity of a brand’s licensing activities has a significant impact on its valuations, with a number of key factors to be considered
Keith Hodkinson and Kelvin King

Getting expressive- indigenous cultures and trademarks

In an uncertain economic climate, licensing can provide a much-needed fillip to brand exposure and add to the bottom line. But not every brand extension is a guaranteed success. Counsel and brand strategists must remember that the push for extra value can sometimes go too far
Jack Ellis

WTR sits down with Antonio Campinos, president of the Office for Harmonisation in the Internal Market (OHIM), to present users’ questions
Trevor Little

Assessing the future – lessons from the gTLD application list

As brand owners consider trademark protection strategies for the world of new generic top-level domains, analysis of the applications revealed by ICANN can inform future tactics. It also provides an invaluable insight onto how the future online environment will shape up for trademark owners
Nick Wood

The chair of the Cooperation Fund, Lord Mogg, explains what is behind the strategy to create common IT tools for IP offices and how this will help users
Lord Mogg

Over the following pages, private practice trademark counsel from 20 jurisdictions outline the benefits of their countries’ Community trademark courts

Trends and long-term enforcement issues in the new gTLD pool

With the applications known, brand owners need to prepare for the potential challenges posed by the expanded online space. Ongoing attention to the landscape of applications and new registries, and careful planning, will allow brand owners to adapt their domain name and enforcement strategies to meet these challenges
Brian J Winterfeldt

Given the increased judicial and administrative focus on developing strong Chinese brands, enhanced protection is increasingly available for all trademarks that have been used and have established a reputation in China. However, in order to receive protection, a number of clear steps must be taken
Steven Q Andrews and Spring Chang

As the ‘trademark bullying’ label continues to divide, the fine line between being a trademark hero or bully is becoming increasingly blurred
Sheri McLeish

The surge in popularity of own-brand products has been matched by improvements in their packaging, leaving brand owners increasingly concerned about the risk of lookalikes. WTR examines how the marketplace is evolving and the future challenges for brand owners
Helen Sloan

ASEAN A memorandum of cooperation on industrial property has been concluded between the Association of Southeast Asian Nations (ASEAN) member state IP offices and the Japan Patent Office (JPO).

Advocate General Sharpston has handed down her opinion in Leno Merken BV v Hagelkruis Beheer BV (C-149/11, July 5 2012), advising that use of a Community trademark (CTM) within the borders of a single member state is not, of itself, necessarily sufficient to constitute ‘genuine use’ of that mark.

Australia is to press ahead with its plain packaging law after the High Court rejected an appeal by British American Tobacco, Philip Morris, Japan Tobacco and Imperial Tobacco against the Tobacco Plain Packaging Act, which was approved by the Australian Senate in November 2011.

The European Parliament has voted to reject the Anticounterfeiting Trade Agreement (ACTA). Despite a last-minute request to delay the vote until the ECJ has ruled on whether ACTA is compatible with EU law, Parliament had its say: there were 478 votes against the treaty, 39 in favour and 165 abstentions.

The decision of the US Court of Appeals for the Seventh Circuit in Sunbeam Products Inc v Chicago American Manufacturing LLC (Case 11- 3920, July 9 2012) represents a major victory for trademark licensees.

In Pie Optiek v Bureau Gevers (Case C-376/11, July 19 2012), the ECJ has held that agreements authorising the registration of ‘.eu’ domain names were more akin to contracts for services than to trademark licences, and that such ‘licensees’ should not have been allowed to register ‘.eu’ domain names during the sunrise period.

ONEL: a genuinely useful opinion on the Community trademark?

The advocate general’s opinion in Leno Merken BV v Hagelkruis Beheer BV addresses the issue of genuine use in the Community – but does it provide a usefully flexible test or one that is simply too uncertain to be helpful?
Nick Bolter and Gareth Dickson

The changing face of civil procedures

While image rights have a history of protection in Romania, the legislation has evolved over time, with last year’s Civil Code representing a fresh approach to the issues surrounding individuals’ rights
Dragos M Vilau and Ionut Lupsa

Nothing lasts forever – or does it?

While personality rights are recognised in Canada, a number of questions remain
Jill Jarvis-Tonus

From the football stadium to the opera house

When your face is your fortune

With a thriving film industry in India, the expectation would be that publicity and image rights laws are firmly established. But is this the reality?
Manav Kumar and Ranjan Narula

A question of balance

Publicity and image rights have been inadvertently protected under the Copyright Law, which does not grant special treatment for celebrities’ image rights
Karla Alatriste

The famous, the unknown and the deceased

Until Parliament legislates on the issue, UK rights holders are subject to uncertain protections for publicity and image rights
Chika Ochonogor and Colin Sawdy

Two sides of the same coin

While the idea of image rights is relatively young, Russia has developed a clear approach to publicity and related rights
Vladimir I Biriulin

There will always remain a fascination and admiration for those in public life – alive or dead. Similarly, there will be always be distinct rules and practices to follow when using the image of another
Aaron D Hurvitz

Maybe you can take it with you: post-mortem rights of publicity in the United States

Right of publicity law is a developing and uncertain area of law in the United States. A federal statute in this area would increase predictability of results and decrease legal costs
John E Ottaviani and Alison Reuter

Protecting your brand in the social media environment