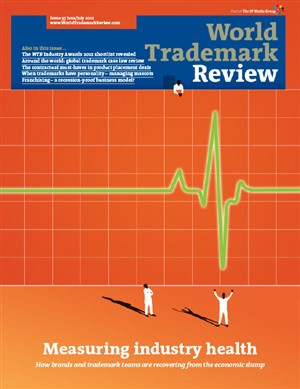 Inside Track: Estée Lauder and INTA

Gregg Marrazzo, president of INTA and senior vice president and deputy general counsel at The Estée Lauder Companies, reveals how he tackles the challenges of overseeing a multi-brand portfolio

Recovery time – the impact of economic conditions on trademark practice

Since its launch in 2009, the Global Trademark Benchmarking Survey has revealed the brutal effects of the global economic downturn for trademark teams and counsel. This year, there are tentative signs of a rebound. But is all as it seems?

Weathering the storm – assessing the resilience of the franchise model

In 2009, WTR presented an assessment of the franchise model and predictions of how it would fare during the recession. Three years on, the authors revisit the market, consider ing how their predictions fared and what has been learnt about the franchising business
Darrell M Johnson and David W Koch

Getting yourself known in Singapore

Technology brands dominate the top 10 list of the world’s most valuable brands, and offer some unique insights into how trademarks and brands can be used to increase corporate value
David Haigh

A question of character – best practice in managing mascots

Mascots offer a unique opportunity to create a brand personality. They also require a close relationship with the marketing department, as well as a careful approach to trademark law
Purvi J Patel

This year’s shortlist for the WTR Industry Awards spans the whole spectrum of trademark-related activity. The chief quality that nominees share is the ability to predict and react to the latest industry challenges
Trevor Little

A matter of principles

It was a busy year in the South African courts, with a number of decisions worth noting for their case law contribution
Deon Bouwer

Inside Track: Estée Lauder and INTA

Gregg Marrazzo, president of INTA and senior vice president and deputy general counsel at The Estée Lauder Companies, reveals how he tackles the challenges of overseeing a multi-brand portfolio
Trevor Little

A number of trademark decisions were issued in 2011, illustrating the difficulties in dealing with bad-faith trademark filings
He Jing and Jingbing Li

Decisions issued in 2011 indicate that the Brazilian judiciary tends to accept comparative advertising as a way of ensuring free competition for all market players, provided that certain conditions are met
João Cunha, Fernando Eid Philipp and Pedro Henrique Dias Batista

The second edition of the WTR 1000 builds on the success of the first, identifying the world’s leading trademark legal services providers. In the first of a regular column, the research team identifies key regional trends and presents a selection of the rankings available in the publication
Mary Hawkins

Last year was a busy one for the Court of Justice of the European Union, with online intermediary liability, the use of advertising keywords and the role of customs author ities in relation to counterfeit goods in transit high on its trademark agenda
Mark Holah, Allan Poulter and Rebecca Pakenham-Walsh

Television, film and online programme producers are offering increased opportunities to position products in their content. However, the practice of product placement is not without legal risk, requiring careful contractual drafting
Terry Parker and Gregory Gulia

Keywords are always in fashion

While trademark counsel are finding it increasingly hard to clear new product names, the challenge will only grow as marketers seek to create new brands, at new tier levels and in new categories, to meet consumers’ desire for choice
Paul Iddon

On May 26 2011 the Supreme Court of Canada released its decision in Masterpiece Inc v Alavida Lifestyles Inc (2011 SCC 27) and, in so doing, clarified important legal principles concerning the interrelationship in Canada between common law trademark rights and those rights which flow from registration. Prior to this decision, very little jurisprudence had dealt with the differences, overlaps and interrelationships between rights flowing from registration and those existing at common law through use.
Kelly Gill

What do Columbus, the Americas and new gTLDs have in common?

As WTR went to press, ICANN had not yet revealed the list of first-round generic top-level domain applications. However, with the window now closed, it is useful to look back at the application process, costs and driving factors – as well as the objections and dispute resolution processes in place for nonapplicants, and the defensive strategies available
David Taylor

With a number of EU countries reviewing their position on the Anti-counterfeiting Trade Agreement (ACTA), the act is to be referred to the ECJ to assess whether it is compatible with the European Union’s fundamental rights and freedoms.

Acceptance of sound marks paves way for other non-traditional marks

The Canadian Intellectual Property Office (CIPO) has announced that it is now accepting applications to register sound marks. With a consultation period on the country’s Trademark Regulations ending on April 23, there could soon be further changes to the treatment of non-traditional marks.

The US Department of Commerce has issued a report identifying the sectors that generate intellectual property and the impact of those sectors on the US economy. At a time when the debate over IP rights rages on, the study sheds light on the contribution of intellectual property to economic performance – with trademarks playing a central role.

Near monopoly for BOTOX mark?

In Helena Rubinstein SNC v OHIM (Case C-100/11 P), Advocate General Mengozzi has confirmed the General Court’s finding that the marks BOTOLIST and BOTOCYL would take advantage of the distinctiveness and reputation of the earlier BOTOX marks.

In Celaya Emparanza y Galdos Internacional SA v Proyectos Integrales de Balizamiento SL (Case C- 488/10), a reference for a preliminary ruling by a Spanish court, the Court of Justice of the European Union (ECJ) has clarified the scope and effect of Article 19(1) of the Community Design Regulation (6/2002) in court proceedings brought by the holder of a registered Community design (RCD) against the holder of a later RCD.

Tune in for the iPad season

The dispute between Apple and Proview over the IPAD mark was ongoing as WTR went to press. However, it offers some important learnings for brand owners.
Luckie Hong

Looking at infringement with fresh eyes

In the ever-expanding online world, brand owners need to be ready to fight infringement at the top and second levels
Micaela Schork

A range of national domains are available in Russia, with disputes between IP owners and domain name administrators played out in the courts
Alla Bogacheva

While the Romanian Top-Level Domain Authority oversees the country’s domains, brand owners should consider whether to utilise its dispute resolution procedures or utilise other methods
Dragos M Vilau and Ionut Lupsa

In addition to a clear ‘.in’ Domain Dispute Resolution Policy, the courts have laid down some consistent guidelines for the treatment of domain name disputes
Ranjan Narula

In creating a domain name strategy, brand owners need to ensure they are taking a national and international perspective
Paolo Di Mella and Nicola Tarantini