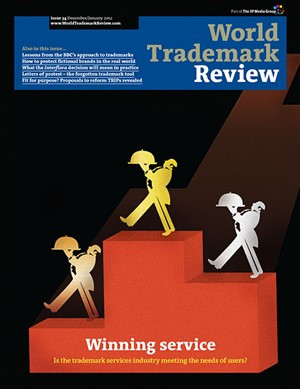 While the Interflora v Marks & Spencer plc ruling in some respects goes further than other decisions on the use of keywords, it also seems a natural progression from earlier case law. WTR asked a range of commentators for their reaction to the ruling, and whether it constitutes good or bad news for brand owners

Budgets are shrinking, workloads are rising and infringement is omnipresent. Against this background, accessing strategic non-legal trademark services has become increasingly crucial. But how is the industry meeting user demand and what does the future hold? In an exclusive survey, WTR polled trademark professionals for their thoughts on how the sector is matching up to their expectations, and put the responses to service providers
Trevor Little

A range of structures can be created to manage intellectual property assets, but companies need to select the correct one for their purposes – and ensure that trademark concerns are properly assessed
Lanning Gerald Bryer and Deepica Capoor Warikoo

What brand owners should know about Australian consumer law

A recent case involving Marksun highlights the role that the Australian Competition and Consumer Commission can play in trademark disputes, and the need for trademark owners to understand the powers it wields
Desmond J Ryan and Rodney De Boos

This year’s MARQUES annual conference was organised around the theme “Reality Check”. The realities that it considered encompassed both the physical and virtual worlds, as well as predictions for the future of brand management and the European trademark system. WTR presents the highlights of the programme
Trevor Little

Letters of protest to the USPTO are an underused and misunderstood tool, and their limitations are not as broad as they first appear
Jamie Pitts

The flipside of product placement, where brands enter the media world, occurs when fictional brands take flesh and are adopted in the real world. When this occurs, particular challenges arise – not least with regard to reputation issues and establishing genuine use
Benoit Michaux and Eva De Pauw

Marketing ‘smell-alikes’ in Germany: the opportunities and pitfalls

Unlike in the Netherlands, where the Dutch Supreme Court has held that perfumes are eligible for copyright protection, no such rulings have been issued in Germany. However, a recent decision provides guidance on the marketing of smell-alikes
Anja Doepner-Thiele and Peter Ruess

The brand protection team at the publicly funded BBC must work within budgetary constraints that could confound even the thriftiest of private sector in-house teams. To compound the challenge, the infringers they must contend with may also be their shareholders
Trevor Little

While the Interflora v Marks & Spencer plc ruling in some respects goes further than other decisions on the use of keywords, it also seems a natural progression from earlier case law. WTR asked a range of commentators for their reaction to the ruling, and whether it constitutes good or bad news for brand owners
Trevor Little

The true impact of corruption on India’s trademark landscape

Two years ago, WTR revealed the opposition gridlock which had brought much of the activity at India’s trademark registry to a grinding halt. But no one could have predicted the turbulent 24 months that were to follow. WTR examines the impact for brand owners
Jane Denny

The rising cost of stadi um naming rights deals is bucking the economic trend, but the brand considerations are being more closely scrutinised. With a greater emphasis being placed on brand valuation methodologies to identify the true benefits of such deals, the considerations also provide useful pointers for other types of sponsorship deal
Elise Neils

Growing your eco-brands in a changing climate

As more advertisers try to engage in green marketing, the challenge to stand out increases. For brands that truly boast green credentials, it is important to know how to position your marks and align these with a credible message
Michael Tschupp

With TRIPs almost 20 years old, a recent project has investigated ways to reform the agreement, culminating in a concrete set of proposals to strengthen the international IP regime. Some of the recommendations are worth further scrutiny
Annette Kur

In Interflora v Marks & Spencer (Case C-323/09), the European Court of Justice (ECJ) has held that a trademark owner is entitled to object to the use of its mark as a keyword if internet users cannot tell whether the goods originate from the trademark owner or a third party. However, the ECJ recognised that advertisers can legitimately present themselves as commercial alternatives to the trademark owner – a positive finding for online search engines.

The Office for Harmonisation in the Internal Market (OHIM) has introduced a mediation service as an alternative to appealing to the Boards of Appeal in trademark and design cases. The service is offered by a team of specially trained mediators drawn from OHIM’s staff. The statement announcing the launch indicated that “mediation is a new departure for OHIM and one that is being offered following interest expressed by users”. Speaking after the launch, MARQUES representative Tove Graulund said that the announcement took the organisation by surprise.

In Budejovicky Budvar, narodni podnik v Anheuser-Busch Inc (Case C-482/09), the ECJ has ruled that Anheuser-Busch must continue to share the BUDWEISER trademark with Budejovický Budvar when marketing its products in the United Kingdom.

On October 1 2011 Australia, Canada, Japan, the Republic of Korea, Morocco, New Zealand, Singapore and the United States signed the Anti-counterfeiting Trade Agreement (ACTA) in Japan. However, the European Union, Mexico and Switzerland – the other negotiating parties – have yet to sign, while a US senator has called for clarification over the ratification process.

In many cases comparative advertising is lawful, but the law demands that an advertisement be authentic. Advertisers should therefore be careful when stepping into this arena
Vladimir I Biriulin

The dividing line separating lawful from unlawful conduct in comparative advertising is very thin. Fortunately, Mexican law provides a set of principles and rules on the matter
Xavier Hadad Rojas

In Canada, there is no express prohibition against direct comparative advertising. However, the prevalence of this practice differs greatly from sector to sector
Jennifer McKenzie and Tamarah Luk

While a true comparison of product performance is the cornerstone of legal protection, it is only the starting point in designing an honest and fair advertisement
Marco Lucchini and Simone Verducci-Galletti

Since there is a range of legislation dictating advertising practice, investment in a proper review and clearance process is minimal compared to the potential cost of claims
Alan Friel and Rory J Radding

In Poland, advertisers have shied away from comparing products, despite the existence of a comprehensive regulatory regime for comparative advertising
Bartek Kochlewski

While existing laws do not dictate what comparative advertising practices are acceptable, given the rapid development of the advertising industry in China, more rules and regulations can be expected
Gloria Q Wu and Samiko Sun

Both the ECJ and the English courts have credited comparative advertising with promoting healthy competition, but advertisers need to ensure they comply with the rules
Nick Bolter and Paolo Cerroni

While India has no specific legislation governing comparative advertising, statutes on unfair trade practice and common law need to be considered. Additional lessons can be found in case law
Rachna Bakhru and Ranjan Narula