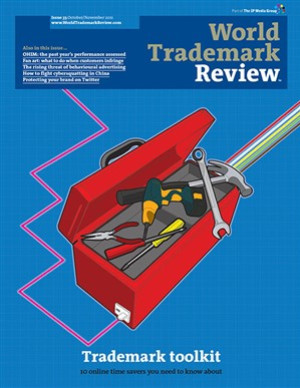 The ECJ’s judgment on the questions referred by the High Court of England and Wales in L’Oréal v eBay has clarified the liability of online marketplace operators. WTR asks trademark practitioners to predict what the impact of the ruling will be for brand owners and operators alike

OHIM the year in review

It has been a hectic year in Alicante. While continuing its core activities, OHIM came under new leadership, commenced internal restructuring and found itself at the heart of debate on the future of the European trademark system. In this article WTR identifies the top filers and canvasses opinion on OHIM’s performance and the big issues of the day

Breaking away from industry colour clusters: creating and protecting a unique colour trademark

Many industries tend to use a limited number of colours for their trademarks and logos. While there can be distinct reasons for this, the question brand owners need to ask themselves is whether the benefits of breaking away from the crowd outweigh those of conforming
Susan Perera

Upon joining Tata Technologies, Anubhav Kapoor faced the challenge of establishing an IP function at a new company while also protecting and steering a well-known global trademark. He explains how the company is finding its feet in the IP sphere

US legislation takes aim at websites dedicated to infringing activity

There has been fierce debate over the PROTECT IP Act, currently stalled in the Senate. However, with infringement continuing, the arguments for and against the act need to be fully weighed
James L Bikoff, David K Heasley and Phillip V Marano

The value of forward thinking: the cybersquatting threat in China

Fighting cybersquatting in China is getting easier, but international companies should lay the foundations now, rather than waiting until they are conducting business in the country
He Jing and Nathan Jackson

The Supreme Court of Canada has taken considerable interest in trademark issues over the past five years, with the latest decision expected to have a significant impact on the use of expert evidence in trademark enforcement proceedings
Robert A MacDonald and Michael O’Neill

While existing social media strategies can be applied to Twitter, it would be a mistake to ignore the particular ways that the information network is used by both the public and infringers
Seth Kertzer and Scott Gelin

Is a single EU market for IP rights finally in sight?

The European Commission’s blueprint for IP rights is not itself a major step forward, but should the digital world’s major players be mobilised to support future developments, it could herald a positive new framework for IP rights protection
Tobias Malte Muller

The ECJ’s judgment on the questions referred by the High Court of England and Wales in L’Oréal v eBay has clarified the liability of online marketplace operators. WTR asks trademark practitioners to predict what the impact of the ruling will be for brand owners and operators alike

Ramping up trademark protection at the Olympics

WTR considers the hot trademark issues arising from next year’s Olympics, with input from industry, officials and even the organising committee’s brand protection lawyer herself

While the stratospheric rise of apps has increased the burden on trademark counsel, the creation of a policing strategy is not as burdensome as it seems
John Sullivan and Michael Leonard

10 of the best online trademark tools

The power of the Internet as a resource is limited only by knowledge of how to use it, so WTR has pulled together 10 of the most useful online tools to help trademark counsel work smarter and faster

Just when you thought the keywords issue was diminishing, advertisers are now targeting online ads based on behaviour. Is this a new chapter in the battle between trademarks and keywords?
Jonathan E Moskin

Fight over PROTECT IP hots up

The International Trademark Association (INTA) and a lobby of law professors including Creative Commons co-founder Lawrence Lessig have locked horns over the proposed PROTECT IP Act, currently before US Congress.

The European postal service is becoming an increasingly popular channel for counterfeit goods, according to statistics released by EU Customs. Last year the agency seized 48,000 counterfeit goods as they passed through the postal system – more than three times the number seized in 2009.

Online marketplace operators can, in certain circumstances, be held liable for counterfeit goods sold through its platforms, the European Court of Justice (ECJ) has ruled.

As the exchange of fan art becomes easier, trademark owners are faced with a dilemma: should they take the same enforcement strategy with their customers as they do with wilful counterfeiters?
Joshua Kaufman

With addressing every instance of online infringement an impossible task, Electronic Arts has forged a three-pronged approach to online monitoring
Vineeta Gajwani

During the last two years, the German courts have decided a number of cases involving pharmaceuticals and medical devices. However, the courts have often reached contrasting conclusions.
Monika Wenz

Pharmaceutical trademark clearance is a complex process. A successful pharmaceutical trademark passes marketing muster only by resonating with relevant consumers and conveying the right brand message. It must also be available for use and registration on a global basis, and must survive regulatory scrutiny not only in the United States, but also in several foreign jurisdictions.
Michael Rizzo and Maria Scungio

To safeguard consumers, it is necessary to have clear, simplified and consistent parameters for the comparison of marks, while avoiding the stifling of competition
Ranjan Narula

As in most other jurisdictions, in China pharmaceutical companies must navigate a dual system for registration and approval of their trademarks and the commercial names of their products.
Gloria Q Wu

In Canada, the brand name for a prescription drug must be selected bearing in mind not only trademark registration issues pursuant to the Trademarks Act and within the domain of the Canadian Trademarks Office, but also regulatory matters handled by the Therapeutic Products Directorate of Health Canada.
Susan J Keri and Megan Langley Grainger