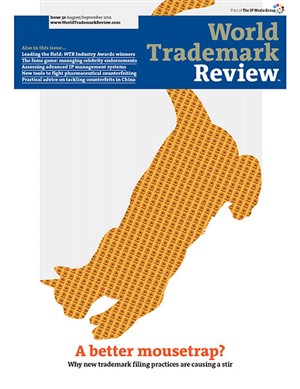 May was a busy month in Alicante, with OHIM
announcing a new organisational structure, sending a
delegation to the INTA annual meeting, signing a
cooperation agreement with the European Patent
Office and considering the European Commission’s
proposals on the role of the European Observatory on
Counterfeiting and Piracy. President Antonio
Campinos also took time out to speak to WTR

Proposed practice rules, if implemented, could pave the way for the registrability of sound andcolour marks

The US system for protection andregistration of non-traditional trademarks isliberal and pragmatic. Practitioners shouldconsider its flexibility and broad protection.Rights holders can confidently embrace non-traditionaltrademarks in their overall IPstrategy for the US market.

According to the law on traditionaltrademarks, words, logos and wording inspecial characters enable consumers todistinguish sources of goods and services.However, what about particular colours andsounds that have the ability to identifygoods and services belonging to a particularbusiness source?

A trademark’s principal function is todistinguish the products of one entity fromthose of another. In order for a sign to servethis purpose, it must be perceived by thepublic as a sign of origin and not as a meredescription, general statement oradvertisement.

The Trademark Law 1998 (significantlyamended in 2010) follows the principles ofthe EU First Trademarks Directive(89/104/EEC). Thus, in Romania, a‘trademark’ is defined as any sign that iscapable of being represented graphicallyand distinguishing the products of oneentity from those of others.

Sophisticated businesses rely on more thansimple words and logos to identify theirproducts and services. Unique product andpackaging shapes, slogans, colours, jingles,endorsement by personalities and evensmells can be used by businesses to identifytheir products or services.

While colour combination and three-dimensional trademarks are still relatively new to China, there remaingreat uncertainties about their protection

The Russian regime does not set down separate regulations to govern applications for non-traditionaltrademarks, although moves are afoot to improve the legislation

In order to make a product or service moreattractive or distinguishable, non-traditionalmarks are often used in modern marketingstrategies. However, such use may result in alack of adequate protection in somejurisdictions. Now that business is conducted on aglobal scale due to technological advancessuch as the Internet, manufacturers andservice providers face pressure not onlyfrom the competition, but also becauseconsumers are more demanding of newcharacteristic elements when deciding whatto buy.

Non-conventional marks are slowly gaining acceptance in India. However, trademark laws and proceduresare still evolving, making it important to keep abreast of the latest developments

New proposals on electronic service of process on fictitious and anonymous websites have comeunder scrutiny, but offer an important tool to fightonline fraud

The downsides of fame – minimising risk in celebrity endorsement relationships

While celebrity endorsements can boost a brand, theycan also result in negative publicity and tarnishreputations. To minimise risk to brand identity,contracts should cater for every eventuality

Getting political: new developments in the fight against pharmaceutical counterfeiting

The Falsified Medicines Directive, the MedicrimeConvention and the Anti-counterfeiting TradeAgreement are set to strengthen the position ofpharmaceutical trademark owners – just as the issueof goods in transit looks set to create new challenges

As exclusive USPTO data reveals the ascent of newbusiness models for trademark filing services, WTRexamines the challenge posed by new market entrantsand why they are causing a stir

Bridging the gap between trademarks and brands

WTR looks back on the key learnings from this year’sInternational Trademark Association annual meeting,held in San Francisco

Inside track: Fighting the fakes in China

The Quality Brands Protection Committee is leadingthe charge in the battle against counterfeiters inChina. Chairman Jack Chang discusses the group’ssuccesses, challenges and plans for the future

On May 17 2011, WTR announced the winners of its fifth Industry Awards at an exclusiveceremony in San Francisco’s Asian ArtMuseum. The awards are designed to recognisethe vital work carried out by in-housetrademark counsel, and identify the teams andindividuals that are performing their functionsto the highest possible standards. Over thefollowing pages we speak to the winners andexplain why they were judged to be leadingexamples of industry best practice.

On your marks for the great gTLD brand race

New generic top-level domains are here, but whatbrand considerations come into play when decidingwhether to apply for a proprietary gTLD and whatshould you take from your existing protection andenforcement strategies?

While there are many successful examples of brandtruncation, for both marketing professionals andtrademark counsel the decision to create alternativefaces for existing marks is one that should beapproached carefully

In addition to identifying those vendors offeringenterprise trademark management systems, newresearch offers invaluable advice for selecting the righttrademark software and systems for your organisation

Talking about the problem

For Links of London, linking its socialmedia and anti-counterfeiting strategiespays tangible dividends

How a better brand strategy led to fewer trademarks

When Heather Steinmeyer joined WellPointInc, she was tasked with building andimplementing a resilient IP programmeacross the organisation – a process in whichthe brand strategy team was key

When having an idea is not enough

Convergence at the heart of OHIM’s new organisational structure

The Supreme Court of Canadahas clarified that trademarkrights acquired through use inone geographic area of thecountry may be relied upon toprevent the registration of alater similar trademark, even ifthe later mark is used in adifferent part of the coun try.