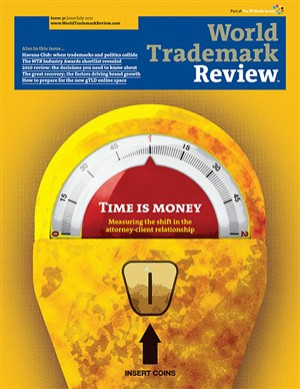 Gerhard Bauer, president of INTA, explains how he balances his day job with efforts to further the development of the IP industry

Rewriting the contract between in-house and external counsel

This year’s Global Benchmarking Survey reveals the changing fee structures of trademark legal services and where brand owners are expecting more of their external counsel. For exclusive statistics and enlightening opinions, read on
Adam Smith

This year’s BrandFinance Global 500 suggests that the US economy is well on the road to recovery. However, an equally noticeable trend is the rise of the developing world as a source of brand value growth. To understand the significance of these findings, it is important to consider the methodology employed in calculating brand value
David Haigh

Coexistence agreements – are you in danger of just agreeing now to disagree later?

In theory, coexistence agreements offer companies an invaluable way to navigate crowded trademark registries. However, in Europe, uncertainty remains over their treatment by courts and trademark offices
Kirsten Gilbert

When getting along isn’t enough: clarifying coexistence in China

While case law addressing coexistence agreements is scarce, the current Trademark Review and Adjudication Board debate on the issue offers some useful pointers
Catherine Sun

Competition for market share has led to a number of interesting cases in India, with the courts willing to depart from previous practice
Ranjan Narula

On the up – practical lessons from IP cases in China

In 2010 the Beijing courts accepted a total of 8,923 first instance IP cases and concluded 8,855. Thisi ncrease has resulted in some significant pointers for international brand owners wishing to secure protection in China
Chumeng (Jessica) Xu

Argentine Customs wades into the goods in transit debate

While Europe awaits the ECJ’s Nokia decision on goods in transit, the Argentine courts have already taken a tough stance in similar circumstances
Alberto Villegas

In 2010 national courts began to apply the ECJ’s guidance on the Google AdWords cases. Although it is still early days, a number of conclusions can be drawn
Tobias Malte Muller

Gerhard Bauer, president of INTA, explains how he balances his day job with efforts to further the development of the IP industry
Gerhard Bauer

The WTR Industry Awards 2011, which will be presented at a ceremony in San Francisco timed to coincide with the 133rd INTA annual meeting, honour leading trademark teams and individuals across a range of business sectors. In this issue, we unveil the shortlist

During the year in which Israel joined the Madrid Protocol, the registration of advertising slogans and boundaries of confusing similarity came under particular scrutiny
David Gilat and Sonia Shnyder

Standing out from the crowd: protecting telecommunications trademarks

In a crowded field, and with ever-expanding product offerings, a number of strategies are available to US telecommunications companies to protect disused brands and, crucially, increase commercial advantage
Gretchen Testerman and Stephen F Jewett

When a symbol becomes the brand

Brand value and identity are intrinsically linked, yet often the temptation is to refresh marks, alter their presentation or, as seen more recently, exclude the word element from a logo. While such moves can reinforce the identity of a brand or help prepare for entry into new markets, they can also backfire
Christopher K Bailey

While China’s three systems of geographical indication registration may prove challenging to foreign brand owners, they are playing an important role in the country’s economic development
George Chan

A design for success – lessons from RCD decisions

Nothing compares to Havana Club

As Pernod Ricard and Bacardi assess the fallout from a major US ruling on the controversial law that strikes at the heart of their dispute over the HAVANA CLUB trademark, WTR speaks exclusively to counsel from both sides
Adam Smith

The latest advocate general opinion on keyword advertising has recently been issued in Interflora Inc v Marks & Spencer plc (Case C-323/09), a reference for a preliminary ruling by the High Court of Justice of England and Wales. Most commentators view the opinion as a victory for Interflora, although some argue that the advocate general did not think that what Marks & Spencer (M&S) is doing is unfair.

The Max Planck Institute for Intellectual Property and Competition Law has published its Study on the Overall Functioning of the European Trademark System, with genuine use and the relationship between the Office for Harmonisation in the Internal Market (OHIM) and national offices at the centre of subsequent discussion.

The Internet Corporation for Assigned Names and Numbers (ICANN) has set a June launch date for the new generic toplevel domains (gTLDs), following the failure to launch the programme at its March meeting in San Francisco.

Advocate general opinion in Nokia: a blow for trademark owners?

Advocate General Cruz Villalón’s opinion in Nokia Corporation v Her Majesty's Commissioners of Revenue and Customs (Case C- 495/09), concerning the interpretation of the EU legislation governing actions by the customs authorities against infringements of IP rights where goods are in the ‘external transit’ procedure, has stated the need for “the beginnings of some proof” that goods may infringe an IP right.

Are donations of counterfeit goods to charities socially acceptable?

Despite calls for seized counterfeit goods to be donated to charity, set conditions should be met in order to protect rights holders and those receiving the goods
Olivier Vrins

Can obvious counterfeit product passing through UK Customs in transit be destroyed under EU Customs laws? If followed by the ECJ, the recent advocate general’s opinion will not go as far as brand owners need
Peter O'Byrne

Litigation in the United Kingdom can be costly and time consuming. Many IP disputes are therefore resolved by settlement. However, where a dispute cannot be resolved amicably, one or both parties may consider that the dispute warrants court intervention.
Nick Bolter and Sascha Grimm

There are no administrative remedies available for the enforcement of IP rights in India. Therefore, the possible options for seeking relief are through the civil or criminal route, or both.
Ranjan Narula

Romania has experienced rapid growth in IP rights litigation over the past 10 to 15 years, with a particular focus on trademarks, patents and copyright (in 1995 there were only around 20 to 30 trademark cases in total). The trend continued after Romania joined the European Union in 2007, and there are an increasing number of cases in which Community trademark rights are at stake.
Dragos M Vilau and Ionut Lupsa

US trademark owners can enforce their trademarks against an infringer under either Section 32 or 43(a) of the Lanham Act (15 USC Section 1051 and following). Section 32 provides for relief from the use in commerce of any copy or colourable imitation of a registered trademark in connection with the sale of, or offering for sale of, any goods or services that is likely to cause confusion or mistake, or to deceive.
Philip T Shannon

Under Chinese law, three types of remedial measure are available to protect trademark rights: civil, administrative and criminal proceedings. A foreign legal or natural person may use these to protect its lawful rights in a trademark
Pei-Chen Wu

Have you ever thought about the best way to defend your trademark in Mexico? It is not easy to recommend a specific path to follow in order to safeguard or preserve a trademark right, since rights holders can choose from a wealth of diverse strategies to protect marks or tackle infringement.
Xavier Hadad

Italy is the ideal forum for the protection of IP rights in the European Union, thanks to judicial expertise, predictability of rulings and the short timeframe in which decisions are issued
Nicoletta Colombo and Donatella Prandin

In the event of a trademark or company name (trade name) being infringed, the proprietor can take certain action against the infringer, including a cease and desist action, claims in damages or proceedings for the disclosure of information and for destruction.
Oliver Loffel and Sascha Abrar

In September 2010 Russia’s High Arbitrazh Court submitted to Parliament a draft bill which provided for the creation of an Intellectual Rights Court, scheduled to arrive by 2012. In the meantime, rights holders have a range of options for enforcing their rights.
Vladimir I Biriulin