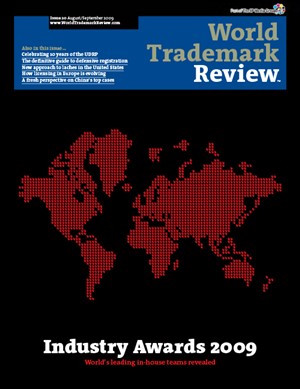 The Uniform Doman Name Dispute Resolution Policy (UDRP) celebrates its 10th anniversary this year at a time when the entire domain name system is on the cusp of change. Now seems the perfect moment to reflect on the achievements of the UDRP over the past 10 years and to assess the challenges that lie ahead for trademark owners as the Internet opens up to new generic top-level domains (gTLDs). In this two-part special, domain name experts from Silverberg Goldman & Bikoff first provide a detailed analysis of landmark rulings issued under the UDRP since its creation; WTR’s Adam Smith then examines the latest controversy surrounding the expansion of the gTLD space.

.trademark: the battle over the new domain space

Innovations appear online daily. The next big thing will undoubtedly be the expansion of the generic top-level domain space next year, but brand owners fear that the step could undermine their rights. WTR joins the debate

The global downturn and changes to domestic practice and procedure have altered Spain's prosecution and enforcement landscape significantly. WTR takes a detailed look at the effects on the Spanish legal market

With demand for luxury goods tumbling, many brand owners are looking to licensing as a means of boosting income. A recent decision from the ECJ could help them maintain a firmer grip on their rights
Kathrin Samwer and Matthias Koch

In the current economic climate is defensive registration a proactive means of securing protection for global brands or a risky venture in light of well-established use requirements?
Marian Coquia-Regidor

A review of the UDRP’s defining characteristics and key decisions is in order as the policy prepares to celebrate its 10th anniversary at a time of intense speculation regarding the future direction of the Internet
James L Bikoff, David K Heasley, Michael T Delaney and Phillip V Marano

Among the top 10 cases of the year selected by the Chinese People’s Supreme Court, five were of key significance to trademark owners. The selection criteria left many puzzled, but a new analysis shows that each decision is remarkable in its own way
George Chan and Tim Smith

Over 150 senior IP professionals attended the third WTR Industry Awards (www.Industry-Awards.com) at the stylish Greg Kucera Gallery in Seattle on May 19 2009. Representatives from the nominated teams mingled with leading private practice lawyers at the exclusive champagne reception in honour of the world’s top in-house trademark counsel. WTR wishes to thank all nominees and sponsors for helping to make the Industry Awards 2009 such a successful event.

The Uniform Doman Name Dispute Resolution Policy (UDRP) celebrates its 10th anniversary this year at a time when the entire domain name system is on the cusp of change. Now seems the perfect moment to reflect on the achievements of the UDRP over the past 10 years and to assess the challenges that lie ahead for trademark owners as the Internet opens up to new generic top-level domains (gTLDs). In this two-part special, domain name experts from Silverberg Goldman & Bikoff first provide a detailed analysis of landmark rulings issued under the UDRP since its creation; WTR’s Adam Smith then examines the latest controversy surrounding the expansion of the gTLD space.

The International Trademark Association’s (INTA) annual meeting is still the most important – and busiest – event in the trademark community’s calendar. This year the conference returned to Seattle for the “greenest annual meeting” ever, as Katrina Burchell, head of trademarks at Unilever and co-chair of the meeting, explained at the opening ceremony. “We live in a competitive world,” Burchell said. “Trademarks are key to winning that battle, so brands are jumping on the environmental bandwagon.” INTA leapt on board too this year, with its special theme of corporate social responsibility. In this section, WTR looks at some of the meeting’s many highlights, so numerous that one delegate said she was “too busy to sleep!”.

The laches defence can prove an effective weapon for striking out a trademark infringement claim in the United States. However, a controversial ruling from the Ninth Circuit may have served to raise the evidentiary burden placed on defendants
Naresh Kilaru and Mark S Sommers

On May 19 2009 WTR announced the winners of its third Industry Awards at a ceremony in Seattle. The awards are designed to recognize the vital work done by in-house trademark counsel, and identify the teams and individuals that are performing their functions to the highest possible standards. The following pages feature profiles of the winners

As part of its continuing efforts to protect well-known marks, the Adjudication Committee of China’s Supreme People’s Court has issued an “Opinion on Certain Issues Concerning the Protection of Well-Known Marks in Civil Disputes”.

Cosmetics giant L’Oréal was involved in three eagerly awaited decisions from courts in Europe in the past few weeks – but with mixed results.

The US Court of Appeals for the Second Circuit has ruled that unique product codes (UPC) are protected under trademark law (Zino Davidoff SA v CVS Corporation (Case 07-2872-cv, June 19 2006)). It is a breakthrough in the fight against counterfeit and greymarket goods.

Trademark managementIs there a fiduciary claim in relation to licences?

Besides the usual, already daunting rights and obligations involved in a licence agreement, a recent decision revisits the claim that a fiduciary relationship may exit between licensors and licensees
Neil J Wilkof

The penalties imposed on counterfeiters in the Gulf region are not stringent enough to act as a deterrent. Brand owners are calling for a rapid implementation of the Unified Gulf Cooperation Council Trademark Law to help them in their fight
Omar Shteiwi

Courts from five different EU jurisdictions have referred questions to the ECJ with regard to keyword advertising. Further guidance on the issue is vital
Benjamin Kieft and Simon Bennett

Non-traditional signs enjoy broad protection in the United States as long as they can function as trademarks. Nonetheless, proving acquired distinctiveness may be challenging for those signs, such as product designs, that lack inherent distinctiveness
Jill Wasserman and Clark W Lackert

The Indian Intellectual Property Office is putting together a manual on trademark practice and procedure which provides thorough guidelines on the requirements to register non-traditional marks. This article examines the latest proposals in detail.
Mohit Lahoty

Although the definition of ‘trademark’ under the Industrial Property Law is restrictive, most non-traditional signs can enjoy a degree of protection in Brazil
Rodrigo Borges Carneiro

Even though the traditional view that trademarks can consist only of visual signs lingers in Romania, shapes, sounds and colour combinations may be registered as trademarks. Case law regarding other non-traditional marks, however, remains limited.
Ionut Lupsa and Dragos Vilau

Spanish trademark law and practice are bound by EU regulations and case law. However, the Spanish Patent and Trademark Office is even more reluctant than the EU trademark bodies to register unconventional marks.
Sandrine Peters and Joao Miranda De Sousa

The definition of ‘trademark’ in Mexican law is restricted to signs that can be perceived visually. In practice, the Trademark Office narrows this definition further – for instance, by not granting registration to colours unless they are combined with other distinctive elements.
Gabriela González Nájera

The protection afforded to non-traditional trademarks in Benelux is governed in large part by EU regulations and case law. However, Benelux courts are often prepared to grant protection where the EU instances are not.
Paul Steinhauser and Milica Antic

In principle, any sign that is distinctive and can be represented graphically may be registered as a trademark in Denmark, but these requirements often prove to be insurmountable hurdles for non-traditional marks.
Heidi Rehné and Janne Britt Hansen

Three-dimensional trademarks can be registered in China as long as they are distinctive and non-functional. However, trademark owners should be aware that similar shapes may already have been registered as patent designs.
Vanessa S Zhou

The conservative approach of the Patent and Trademark Office and the courts to the protection of non-traditional trademarks, as well as limited national case law on the issue, mean that much remains to be clarified with regard to the scope of protection of such signs.
Vincenzo Melilli and Donatella Prandin

Israeli law recognizes a broad range of signs as being registrable as trademarks. However, the Trademark Office’s practice on this matter is rather restrictive.
Kfir Luzzatto and Oren Weiner

Part IV of Russia’s Civil Code provides for the registration of an array of non-traditional trademarks. But graphical representation may be an issue in some cases.
Alexander Nesterov

Although a number of non-traditional signs are protectable as trademarks under EU law, Portuguese law and practice are rather more restrictive.
Gonçalo da Cunha Ferreira and Isabel Bairrão

Non-traditional marks
are, by and large, protectable in Norway, with the restrictions imposed across the European Union also applicable in this non-EU country.
Line Schartum-Hansen and Lisbeth G Wolther