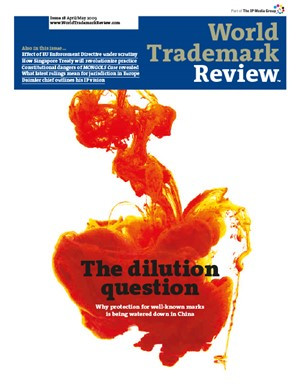 The head of trademarks at Daimler speaks to WTR about fulfilling his childhood dream, simplifying trademark law and surviving the economic downturn

Nordic know-how on the up

The global slowdown is starting to bite in the larger trademark services markets of the Nordic region. However, some firms feel that strong cross-border expertise will give them an edge in an increasingly competitive field

The head of trademarks at Daimler speaks to WTR about fulfilling his childhood dream, simplifying trademark law and surviving the economic downturn

The shape of three-dimensional mark protection in Israel

Last year the Israeli Supreme Court issued two decisions that seemed to reverse the Trademark Office’s restrictive practice regarding the registration of three-dimensional marks. However, the interpretation of these rulings by the Trademark Office indicates that the issue is far from settled
Neil J Wilkof and Gilad Shay

China’s dilution of the dilution doctrine

While Chinese law does not specifically recognize dilution, new analysis of 100 of the most recent cases shows that some courts have been applying dilution principles. However, the Supreme Court’s latest guidelines indicate that China is a very long way from adopting the US approach to dilution
Luckie Hong

Evolving approaches to jurisdiction in Europe

In relation to online infringement, some jurisdictions may appear friendlier to mark owners than others. But before assessing the facts of a case, the relevant court will need to accept jurisdiction. Case law on this issue is developing in Europe
Nathalie Marchand, Julia Wahrendorf, Emmanuel Baud and Larry Cohen

Brand owners and producers in the Arab world are calling for better protection of geographical indications. WTR investigates what is being done

The Singapore Treaty signed nearly two years ago mainly tackles procedural changes. However, its coming into force in March acts as a reminder that streamlined and harmonized trademark application procedures are far from being a reality across the world
Anne-Louise McMenemy and Sheena Jacob

Marks, forfeiture and a constitutional conundrum

In Autumn 2008 a US district court ordered the forfeiture of marks owned by a gang known as the Mongols on the grounds that the gang engaged in illegal activities. While the forfeiture of property is provided for under various US statutes, this case raises more than its fair share of legal and constitutional issues
Ana Ramalho

USPTO puts a limit to fraud

Strengthening enforcement, building capacity and raising awareness are all part of the World Customs Organization’s plan to curb counterfeiting and piracy. The programme for 2009 includes the creation of extra tools to enhance operations and promote the exchange of information
Kunio Mikuriya

The view onlineIs a wolf in Grandma’s clothing confusing or just initially confusing?

As initial interest confusion on the Internet continues to divide the courts, our columnists suggest that they focus less on initial confusion and instead apply the traditional confusion test
Antonio Turco and Sheldon Burshtein

As IP budgets are likely to be cut along with the budgets of most other in-house departments, it is time to review some key elements to ensure that the trademark department remains on top form
Evie Kyriakides

European Union
A Community trademark offers the considerable advantage of protection in the European Union’s 27 member states. However, the Community system still presents a number of drawbacks that may lead mark owners to prefer other registration systems.
Vanessa Marsland and Niall Tierney

A lack of objective guidance from the Portuguese Trademark Office and conflicting decisions from the courts with regard to the classification of goods and services create difficulties for IP rights owners seeking to protect their rights in Portugal.
Gonçalo da Cunha Ferreira and Isabel Bairrão

Germany is Europe’s largest economy, so careful consideration should be given as to how best to protect trademarks in this key jurisdiction.
Katja Grabienski and Martin Viefhues

Trademark prosecution in Canada presents many unique features, including some disparities with the systems in place in its neighbour – the United States.
Janice Bereskin

Knowledge of the law is one thing, but more needs to be considered when thinking of adopting a new trademark in Benelux. In this article some strategic considerations are discussed.
Paul Steinhauser and Milica Antic

While Romania has a longstanding tradition of protecting trademark rights, issues relating to its accession to the European Union make the development of registration strategies tricky.
Dragos Milhail Vilau

Trademark prosecution in Italy differs strikingly from most other systems. The process will significantly improve once the opposition system, set out in the Trademark Law of 1999, is finally implemented.
Simone Verducci Galletti and Donatella Prandin

While trademarks are protected under both common law and federal law in the United States, obtaining a trademark registration offers unparallelled advantages. But brand owners should beware of the quirks of the US registration system.
Katrina M Quicker and Clark W Lackert

Protecting trademark rights in Mexico poses a number of challenges. The law sets out strict requirements on the types of signs that are capable of registration and the procedures differ in many ways from those in place in other jurisdictions.
Carlos Alberto Reyes

Marks that are similar and were filed close together in time are normally examined by the registrar of trademarks who will render a decision based, among other things, on the good faith of the applicants and the extent of use of the marks at issue.
Oren Mandler and Kfir Luzzatto

Despite not being part of the European Union, Norway’s registration procedures are, for the most part, aligned with those in place across Europe. However, there are some differences so rights holders must plan their filing strategies with care.
Line Schartum-Hansen and Toril Melander Stene

Brand owners seeking to register their marks in China need to be aware of the delays at the Trademark Office, the quirks of the classification system and the pitfalls of transliterating names into Chinese characters.
Grace W Li

Selecting the goods and/or services to be applied for in a trademark application is a more complex task than meets the eye. This is particularly true in Spain where the trademark office's practice differs from that of other EU IP offices.
Celia Sueiras Villalobos and Natalia González-Alberto

Trademark prosecution in Brazil presents specific challenges – the most obvious and difficult of which is the substantial backlog at the Trademark Office.
Peter Eduardo Siemsen and Gustavo Andrade