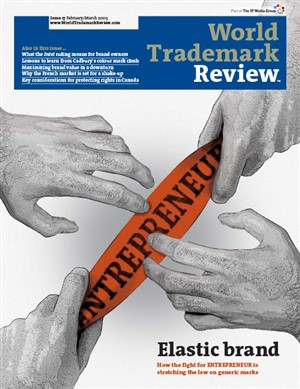 In March 2008 brand valuation consultancy BrandFinance® published its BrandFinance 500 survey, which ranks the world’s most valuable brands. As a result of the turmoil in the world economy BrandFinance updated the results in September 2008, revealing a significant decline in brand values

In March 2008 brand valuation consultancy BrandFinance® published its BrandFinance 500 survey, which ranks the world’s most valuable brands. As a result of the turmoil in the world economy BrandFinance updated the results in September 2008, revealing a significant decline in brand values
David Haigh

The French market for trademark services could be set for a radical overhaul in the very near future. Practitioners and brand owners await the developments with interest

For decades Entrepreneur Magazine has been fighting the allegations of small businesses, multinationals and aggressive critics that its trademarks are generic and invalid. The magazine's spat with Ernst & Young sets the stakes higher than ever before. WTR investigates

The problem with purple

The danger of developing a two-tier system

The challenges of the post-dot age

The proposed launch of new generic top-level domains in 2009 is likely to cause an unprecedented shake-up to the domain name system. It will inevitably cause a considerable burden on rights owners who will need to reconsider their online strategies carefully
David Taylor

Protection of well-known marks after Intel

With its Intel ruling, the ECJ has attempted to clarify dilution law in Europe. However, the decision has been seen as a blow to the owners of 'superbrands' and appears to favour the common law approach of requiring claimants to prove actual or likely damage
Louisa Albertini and Hamish Porter

WTR spoke to a number of leading practitioners in France to find out who they rated as the best in the trademark law business. Here are the names that were mentioned most

Trademark managementThe lowdown on trademarks in an insolvency

Trademarks are important to the value of an insolvent business. The business may prove more valuable if split and, if so, its trademarks will be divested separately. This may give rise to practical and legal problems
Mark A Lubbock and Imbali Iserles

Anti-counterfeiting and piracy operations carried out by INTERPOL in various parts of the world have been extremely successful. The INTERPOL IP Rights Programme became truly global when it was deployed in Africa in 2008
John Newton

The view onlineThe pitfalls of the revised '.cn' DRP

Nearly three years after the rules governing '.cn' domain name disputes were amended, there appears to have been no significant drop in the number of decisions favourable to complainants. Enforcement of these decisions is another matter entirely–
Gabriela Kennedy and Ricky Leung

As the Internet offers increasing opportunities for wrong-doing to scammers, counterfeiters and other infringers in the online environment, this article reviews some of the recourses available and best practices for brand owners
Kathleen E McCarthy and Clark W Lackert

China is already home to the highest number of internet users in the world. Online trademark infringement is a growing concern and recent cases suggest that the onus for policing rights falls on brand owners.
George Chan and Grace W Li

The liability of online auction website operators and search engines are among the most controversial and most important issues in relation to trademarks online. So far, the Brazilian courts have not considered either in much detail.
Rodrigo Borges Carneiro

Because of the difficulties in identifying the perpetrators of many acts of online infringement, IP rights holders increasingly turn to internet service providers for redress. However, the Spanish courts have so far interpreted narrowly the EU provisions on providers’ liability
Carolina Pina and Joao Miranda De Sousa

OLIVARES
Due to a lack of legal framework, trademark owners find it difficult to enforce their rights on the Internet – in particular, on online auction platforms. However, self-regulation codes have been developed in order to tackle this issue
Sergio Rangel

The law relating to online infringement continues to develop rapidly in Benelux. Among other things, trademark owners must familiarize themselves with the latest rulings on the liability of internet service providers
Paul Steinhauser and Milica Antic

Under the Electronic Commerce Act, an internet service provider is not liable for the information that it stores unless it has actual knowledge of the illicit nature of such information. So far, no court decision has addressed the issue of the liability of service providers
Gonçalo da Cunha Ferreira and Paula Veiga

The Indian courts have had to address many legal issues arising from the development of the Internet – from passing off to phishing, metatagging and jurisdictional matters
Pravin Anand

Contextual online advertising is big business in Russia, much of it potentially infringing. A lack of clear law in this area makes enforcing trademark rights almost impossible
Mark Chizhenok

Issues once hotly debated, such as metatagging, have now been settled in Germany. However, new practices, in particular keyword advertising and the liability of online auction platforms, still give rise to conflicting court decisions
Jan Schumacher and Martin Viefhues

Jurisdiction is probably one of the most important legal matters raised since the launch of the Internet. A Jerusalem court has considered this issue in detail and has ruled, among other things, that a decision from a foreign court can be enforced in Israel.
Moshe Bartal and Kfir Luzzatto