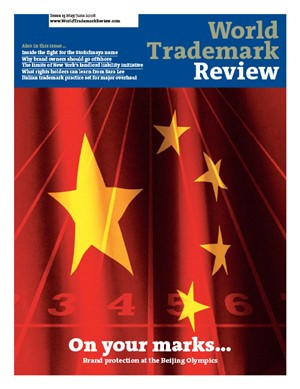 Shaken and stirred: the adventures of a Soviet vodka brand

The fate of the STOLICHNAYA brand since the collapse of the Soviet Union has been eventful, to say the least, with the fight over rights to the mark extending well beyond the borders of the Russian Federation. A close look at the dispute still raging in Australia provides an insight into the complexity of the issues involved

Not to be missed

A number of interesting US decisions issued in 2007 did not receive the coverage they deserved. They include the following
Leigh Ann Lindquist

Making the most of BVI corporate vehicles

Shaken and stirred: the adventures of a Soviet vodka brand

The fate of the STOLICHNAYA brand since the collapse of the Soviet Union has been eventful, to say the least, with the fight over rights to the mark extending well beyond the borders of the Russian Federation. A close look at the dispute still raging in Australia provides an insight into the complexity of the issues involved
Julian Gyngell and Pavel Arievich

Western companies have been knocking at China’s door for three decades now, all trying to entice the country’s massive purchasing power to their products. Two questions continue to nag at these companies as they consider the Chinese market
Burt Alper

Landlord liability and the city

New York City mayor Michael Bloomberg's administration has begun an anti-counterfeiting initiative based upon the legal theory of landlord liability. Many applaud the approach; however, others question whether the initiative merely pushes the counterfeit trade to new locations
G Roxanne Elings

By all indications, 2007 was the worst year ever for cybersquatting, but while the popularity of ‘tasting’ and ‘kiting’ creates new challenges for brand owners, IP counsel at Time Warner and Dell are leading the way in fighting back
Darren T Olivier

The sheer size of Sara Lee’s portfolio means that its trademark department tackles almost every aspect of trademark protection and enforcement. Other rights holders can learn much from its approach to copycat products and counterfeiting

The case of Louis Vuitton Malletier SA v Haute Diggity Dog LLC (Case 06- 2267, November 13 2007) highlighted that the reform to the law of dilution brought in by the Trademark Dilution Revision Act in 2006 may not be the panacea that famous mark owners believed it would be
Rochelle D Alpert

A solution to the EU jurisdiction conundrum?

A recent Austrian court ruling may resolve a troubling jurisdictional issue that has perplexed commentators and CTM owners alike, helping the latter to enforce their rights against infringements in the European Union by several defendants located both inside and outside the European Union
Hans Georg Zeiner

Since the announcement in 2001 that Beijing would host the 29th Olympic Games, the Chinese authorities have made significant improvements to the IP protection regime. With the games now just around the corner, the authorities and rights holders must start putting their final strategies in place
Catherine Sun

Bad reputations are hard to shake. Many still believe that Italy has ineffective enforcement and trademark registration systems, but the former is no longer true and the latter is set to change too

In a case involving US brewer Anheuser-Busch Inc, the Hong Kong High Court issued in January 2007 an important decision in relation to the registration of shadow company names that incorporate famous trademarks
Christine Yiu and Gabriela Kennedy

When it comes to the most effective ways of dealing with counterfeiting in China, brand owners should look no further than the tried and tested methods adopted by their peers – both large and small
Joseph T Simone

Is time up for free riding in Europe?

Cloe gets her day in court

In Mexico, the courts and the National Institute of Intellectual Property (IMPI) are locked in a power struggle over the registrability of three-dimensional marks. A typical example was the case of In re MGA Entertainment Inc (Case 32271/05-17-05-6 (April 3 2007)), in which the Federal Court for Fiscal and Administrative Justice reversed an IMPI decision that refused registration of the three-dimensional shape of a doll
Roberto Arochi

Vigilance on the part of trademark owners is vital to ensuring that a trademark’s goodwill is not exploited or damaged. This column explores the ways in which brand owners can stop unlawful actions and protect brand integrity
Jonathan A Hyman and Jeffrey Van Hoosear

Rights owners are constantly looking for new ways to fight the rising trade in fake goods. Recently, the UK authorities have been using the anti-money laundering legislation in order to tackle counterfeiting
Stuart Adams

The view onlineFood for thought for domain name tasters

Domain name tasting is the practice whereby domain names are tested over a five-day grace period to see whether they attract a sufficient amount of traffic in order to be profitable. The grace period has had some unexpected, undesirable consequences that ICANN is seeking to tackle
David Taylor

Brands from the frontlineFamous and well-known marks: the challenges of protection

The owners of ‘well-known’ or ‘famous’ marks can benefit from cross-border protection, but far more needs to be done to harmonize the international principles behind these doctrines

The health industry has always been a sensitive sector, including in relation to trademarks. The current practice for the assessment of pharmaceutical trademarks is the result of a long evolution of French case law
Franck Soutoul

Unlike marks in most other business fields, pharmaceutical trademarks are affected by regulatory law. In Germany, this influence accompanies the trademark throughout its existence. The owners of pharmaceutical trademarks therefore face a number of specific questions – not only when registering a trademark, but also in connection with maintaining and defending it
Hanna Karin Budde and Martin Viefhues

Pharmaceutical trademarks have been the subject of much debate, discussion and case law in India. This article runs through some of the key decisions
Santosh P Kumar and Swathi Sukumar

The sale of pharmaceutical products online is an increasing problem. Various Australian statutes may help in controlling such trade
Elisabeth J Coffey and Richard T Gough

China, the most populous country in the world, has a median age that continues to rise. If it can maintain its strong economic growth, building on the success of the past decade, the long-term prospects for pharmaceutical companies in China will be very promising
George Chan

The registration of pharmaceutical trademarks in Mexico may be problematic as there are no clear-cut examination criteria to assess similarity with prior marks. In addition, the body charged with granting marketing authorization has no obligation to assess new applications against existing trademark registrations
Adriana Menocal

The Italian courts have issued a number of rulings on pharmaceutical trademarks in recent years. This article looks at a selection of key rulings in this field
Laura Pellicanò and Donatella Prandin

Infringement is, unfortunately, often an unavoidable fact of life for brand owners. Putting in place the most appropriate litigation strategies can help to lessen the pain

Bad reputations are hard to shake. Many still believe that Italy has ineffective enforcement and trademark registration systems, but the former is no longer true and the latter is set to change too.