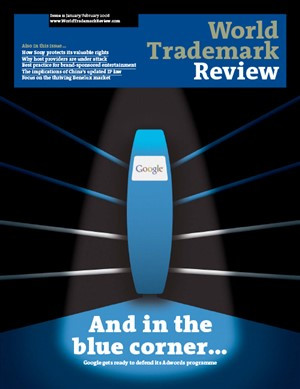 Brand owners need new ways to promote their products and brands. Entertainment produced by or on behalf of a brand owner is an increasingly popular option, but one that must be handled carefully to avoid certain pitfalls associated with advertising

Three is still the magic number

The Benelux market is a microcosm of the CTM system: different countries united by a common trademark registration procedure. The union of Belgium, Luxembourg and the Netherlands has clear benefits for mark owners since they can simultaneously protect their marks in three jurisdictions

China enacted its first Trademark Law in 1982, and amended it in 1993 and 2001, respectively. The Chinese government is now mulling over amending the law for a third time. Many view the changes as essential and they are likely to have a significant impact on rights holders and practitioners alike
Liu Guizeng

Brand owners need new ways to promote their products and brands. Entertainment produced by or on behalf of a brand owner is an increasingly popular option, but one that must be handled carefully to avoid certain pitfalls associated with advertising
Brian P O'Donnell and Ron N Dreben

Just over 10 years after leaving the Soviet Union, the Baltic states had created from scratch IP protection systems that were good enough to allow them into the European Union. But there is still scope for improvement
Roman Cholij

Host providers must face up to extended liability

French and German courts are at the forefront of defining the limits of host provider liability law, which looks set to be one of the key issues of 2008. eBay has been one of the main targets of court action so far and it is bracing itself for more of the same
Philipp Plog and Alexandre Diehl

The Benelux Office of Intellectual Property has achieved a lot in just over 10 years. In that time, it has introduced examination on absolute grounds, an opposition process and expedited procedures. However, some argue that it has gone from having one of the most liberal registration systems in Europe to one of the strictest

The price of success

Sony Corporation’s history spans six decades. During this time it has proved itself to be one of the most innovative and commercially successful companies around. A centrally controlled IP division helps keep a close tab on the group’s valuable marks, but problems cannot always be avoided

The case against Google

It’s the biggest search engine on the planet, a leader in online advertising and an ideas factory for creative new ways to use the Internet. It’s also a magnet for controversy. But then, Google didn’t get where it is today by shying away from a fight

Coexistence agreements play a unique and vital role in trademark practice, with no real equivalent in either the patent or the copyright field. Given the range of circumstances which may give rise to coexistence agreements, careful thought should be given to the drafting of such agreements
Neil J Wilkof

Legislation and case law have provided some guidance on the issue of whether a dealer of well-known brand products may use the name of the brand in its domain name. However, questions remain as to whether website content must be taken into account when assessing the risk of confusion
Hidde J Koenraad and Tjeerd Overdijk

Brands from the frontlineCustoms officials are worth their weight in gold

IP crime constitutes a serious threat to the economy of the United Kingdom. The recently released Intellectual Property Crime Report 2007 highlights the scale of counterfeiting and piracy in the country, as well as the increasing efforts of industry and government to tackle the problem
Lisa Lovell

Well-known and famous marks enjoy increasingly good protection Down Under, even though only one provision mentions them expressly
Ross G McLean

Italian legislation provides a good framework for the protection of well-known marks. However, there has been limited case law so far, leaving some uncertainty as to how to determine when ‘unfair advantage’ or ‘detriment’ to the well-known mark occurs
Sergio Mulder

US federal trademark law was amended on October 6 2006 by the Trademark Dilution Revision Act. Rulings under the new law trickled in during 2007, of which the most noteworthy is the decision of the US Court of Appeals for the Fourth Circuit in a commercial parody case involving Louis Vuitton
Jeffrey H Kaufman and Kyoko Imai

Through a combination of local laws, EU legislation and international measures, famous marks are well protected in Benelux. Over the past few years, the courts and the Benelux Office of Intellectual Property have strengthened well-known mark owners’ rights yet further
Paul Steinhauser

Protecting trademarks that enjoy a reputation is a sensitive aspect of trademark law practice and doing so in France is no exception. A review of both the statutes and case law is needed to draw a clear picture of the French approach
Franck Soutoul and Jean-Philippe Bresson

European Union
Both the First Trademarks Directive and the Community Trademark Regulation afford protection to well-known and famous trademarks. Uncertainty remains as to the definition of some key terms – for instance as to whether ‘well-known marks’ and ‘marks with a reputation’ have the same meaning
Vanessa Marsland

Germany has a long history of offering strong protection to well-known and famous marks. As the courts have developed the law in this area, they have slowly relaxed the criteria for recognition as a well-known mark. These days, good survey evidence can mean that even the most descriptive of marks may be classified as well known
Catherine Pröm and Kay-Uwe Jonas

Following an amendment to the law in 2005, procedures allowing rights holders to apply for declarations that their marks are famous or notorious in Mexico finally came into effect in late 2007. Rights holders and their advisers must be aware of the important distinctions between these two types of mark
Marcela Bolland González

For trademark owners, India can be a land of opportunity, but also one that poses major challenges. Four trademark practitioners discuss the issues