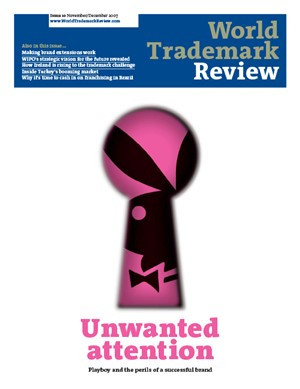 Following a shift of emphasis from the government, the Philippines has made significant progress to improve its IP rights protection regime in the past two to three years
Vicente Amador

Brand extensions and celebrity endorsements can be the easiest route to a rapid increase in revenue. But as some companies have found out, they are not guarantees of success
Victoria Slind-Flor

The strong man at Europe’s door

The trademarks services of the Turkish Patent Institute have improved considerably over a very short period, particularly in terms of processing speed. But issues remain as to the quality of some decisions

With a growing economy and large population, Brazil is now a key market for rights holders looking to develop their franchising arms. However, brand owners seeking to cash in need to be aware of their rights and obligations
Rodrigo Borges Carneiro and Flavia Amaral

Turkey is shedding its image as a counterfeiting hub and is proving that it is a serious player in the IP rights arena. The rapid development of its legal services market highlights the progress made so far

The perils of attraction

As a brand it looks as if Playboy has it all. Strong marks and a distinctive logo have made the company a licensing powerhouse. However, this also makes them attractive to counterfeiters

Licensing should create a win-win situation for both licensor and licensee, but things can still turn sour. Therefore, all licensing agreements should contain unambiguous termination provisions that clearly define which conduct constitutes a fundamental breach
Neil J Wilkof

The view onlineWhat you need to know about ‘.asia’

Registering your marks as domain names under ‘.asia’ may not be a necessity from a marketing point of view, but the risk of cybersquatting should make you think twice
Marc Trachtenberg

Counterfeiting perspectivesFighting counterfeiters in Italy – a step in the right direction

Italy is a hotbed of counterfeiting – in terms of both production and consumption. A newly created High Commission may be what the various Italian anti-counterfeiting organizations need to coordinate and rationalize their efforts
Julia Holden

Brands from the frontlineFrom the cradle to the grave

While human life expectancy is on the increase, that of cosmetics trademarks is dwindling. This requires a new approach for the trademark lawyers protecting these brands
Zeeger Vink

The use of another party’s trademark in advertising remains controversial in the online context. The US courts have yet to come to an agreement as to the legality of practices such as keyword advertising
David S Fleming

The relationship between trademarks and advertising has its complexities, prompting questions such as when using another party’s trademark in advertising constitutes an infringement, whether a slogan can be registered as a mark and what advertising uses will suffice to maintain rights in a mark
Ross G McLean and Jonathan Flintoft

European Union
Advertising in the European Union is heavily regulated – at both general and specific levels. Brand owners and their counsel need to be familiar with at least the two directives that regulate advertising across all fields
Vanessa Marsland

It is still unclear when use of another party’s mark in advertising is infringing under UK law. That is why the English courts have referred a number of questions on this issue to the European Court of Justice
Chris Aikens and Karen Fong

Brand owners must consider the risk of breaching unfair competition law when advertising their products. Luckily for advertisers, the Supreme Court has issued two decisions that relax Germany’s stringent law in that regard
Karl Hamacher and Kay-Uwe Jonas

Two sets of regulatory frameworks govern advertising practices in Italy. One is self-regulatory, the other legislative. Brand owners looking to promote their products or services in Italy and those advising them need to be fully aware of both systems
Paola Gelato

Ten years ago, comparative advertising featuring third-party marks was unlawful in Benelux. The implementation of the EU Comparative Advertising Directive has forced a change in thinking, but the courts still maintain a relatively strict approach
Paul Steinhauser and Rens Schrijver

Advertising in Mexico is highly regulated and IP law forms part of the framework governing this area. Brand owners should familiarize themselves with the rules and protection available before embarking on an advertising campaign
Carlos Trujillo